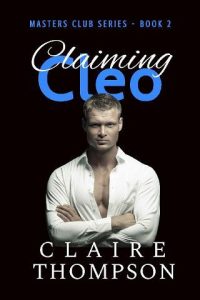 Cleo Chapman entered the Masters Club main dungeon, stopping a moment just inside the doors to catch her breath. The large space was already fairly crowded, it being a Saturday night. As she looked around, she realized she’d forgotten to check her Masters Club phone app to see which Doms would be in attendance that evening.

Now, looking around the spacious, well-equipped dungeon, she spied Jess, her best mate, looking beautiful in a sheer black bodysuit, her high breasts perched in demi-cups, her long auburn curls hanging prettily down her back. Jess saw her, too, and gave a wave and a bright smile.

Cleo started to head toward her friend, but at that moment Master Cameron, Jess’s partner, appeared, a gear bag slung over his shoulder. He placed a proprietary hand on Jess’s shoulder and led her toward a scene station.

So Cleo instead made her way to the thick floor cushions set against one wall where pleasure subs and slaves waited to be tapped for a scene. She had at least an hour before Master Grayson needed her for the submersion tank demo. She was looking forward to just being a pleasure sub until then.

She knelt on a cushion between Katrina, a sweet girl with satin-smooth skin and big doe eyes, and Charlie, a male sub who had a striking resemblance to a young Harrison Ford.

Mistress Olivia appeared in front of Charlie, looking regal in red leather and stilettos. “Ready to suffer, boy?” she asked with an evil grin.

“Oh, yes, Mistress,” Charlie said, rising at once to his feet.

Once the pair had drifted away, Katrina and Cleo exchanged murmured small talk. As befitted their status, they kept their heads lowered, backs straight, hands on their thighs, palms up. It wasn’t long before Katrina was tapped and led away by Master Luke, a delightful sadist who enjoyed both men and women.

Another sub had just taken her place beside Cleo when a pair of long, muscular legs encased in soft black leather appeared in front of her. A large hand settled lightly on her bare shoulder. The sudden, unexpected yet achingly familiar scent of citrus and cedar assailed her senses. She caught her breath, an electric jolt of recognition shooting through her body before her mind could process it.

“Hello, there, Cleo,” Master Jack said in that soft, deep voice she would know anywhere. “Been a while.”

For a moment, Cleo forgot how to breathe. Every nerve in her body went on instant high alert. What the hell was he doing there? Surely, she would have known he was coming to the States?

She recalled again her failure to check the phone app, and had to struggle to bite back a curse. This was the last guy she wanted to see.

Deep breaths, she reminded herself. You’re not that girl anymore. This man has no control over you. He never did.

Slowly, Cleo lifted her head, forcing her face into a mask of submissive calm, though her heart continued to beat a mile a minute. He was still as gorgeous as ever, though she detected a lingering sadness in those deep brown, intelligent eyes. Even in the dim light of the dungeon, his blond hair shone as if spun from gold. His black T-shirt stretched alluringly over broad, muscular shoulders and hugged bulging biceps.

But the ground beneath her didn’t open. The heavens didn’t crack with thunder. Relief moved through her, calming her nerves. She was fine. She was over this guy. He was just another Dom, and she would serve him as she did every Master at the club.

Cleo shifted her focus from his eyes to his mouth so she could concentrate. “Good evening, Sir,” she said evenly, pleased her voice was steady. “I didn’t realize you were in the States.”

“I’m here for business,” he said, a small smile playing on his handsome face. The smile broadened, his eyes hooding. “And pleasure.”

Okay. You can do this. You can totally do this. Remember what Dr. Erdman says. You’re empowered now. You know your mind and heart. You’re ready for anything. This will be a good test for you. It’ll prove you’ve truly moved on.

Master Jack held out his hand. Cleo took it, allowing him to hoist her to her feet. But instead of leading her away, he pulled her suddenly into his arms. She held herself stiffly for a moment, but as his intoxicating scent and warm embrace cocooned her, she melted against his broad chest. Closing her eyes, she let herself believe, for that one instant, that she was his.