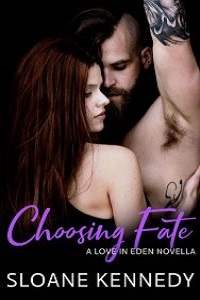 I knew in my gut long before I turned the radio down that it was a woman's cries I'd heard coming from outside. There was a small part of me that wanted to turn the radio back up and just ignore the sound of raised voices because the last time I'd gotten curious about such sounds, I’d nearly ended up behind bars.

But in the end, I set the volume on the lowest setting and stood there in silence as I simultaneously cleaned the wrench in my hand and listened to the commotion outside.

Energy surged beneath my skin as I heard a raised male voice say, "I'm tired of playing around, Jolene!"

There was a response, but it was too soft to make out. That in itself had warning bells going off in my head. "Let him have it, sweetheart," I murmured to myself. How many times had I played witness to the same type of encounter? Over and over I’d silently begged my mother to go off and rip my father a new one, but she never had. Even when I'd gotten old enough to stand between her and the bastard whose blood ran through my veins, she'd never reached her breaking point. At least, I hadn't thought she had. I'd been proven wrong three days after my twelfth birthday.

I shook off the memory that tried to invade my mind. It was easy enough to do when I heard the guy outside impatiently snap, "Do you have any idea how many versions of you are in this piece of shit town? Younger, prettier, smarter… I like me a challenge, but I've had a hell of a day and I’m not in the mood for your uptight bullshit."

I still couldn't hear what the woman had to say when she responded, but there was no doubting what the sound was that sharply cut her off. My vow to stay out of the situation went up in smoke when I heard no additional sounds coming from the woman. In fact, all I heard was the occasional soft banging of a body hitting metal.

There was a tiny part of my brain that tried to remind me that I needed to keep myself in check, but the second I walked out the side door and stepped around the building to where the gas pumps were, that voice went silent.

The lights above the pumps were flickering, so it was only every few seconds that I saw what I knew was yet another image that would haunt me for the rest of my life.

The woman was small. There was just no getting over that part. Maybe it was because the guy she was with was a tank or maybe she was just a little thing, but either way, she was sorely outmatched. The guy had her pressed up against the side of a very expensive-looking pickup truck and was using one of his hands to hold both of hers in place above her head. I couldn't really see the rest of her because his large body hid much of hers from view. But now that I was outside, there was no missing the sounds she was making. Or trying to make, at least.

The asshole holding on to her was covering her mouth with his and even though I didn't see her face, I knew it was a bruising, cruel, ugly kiss that was meant to hurt and punish and nothing more. I could hear the sobs in the woman's throat as the man's free hand pressed between their bodies. It didn't take much of an imagination to determine what was happening.

I hadn't stopped moving after leaving the garage, so it took just seconds to reach the pair. My blood boiled with fury and excitement at the same time. I'd never been particularly proud of the fact that I sometimes took pleasure in hurting someone who was hurting another, but at that very moment, I had absolutely no shame over how much I was going to enjoy this.

I grabbed the guy by the hair and yanked hard at the same time that I slammed my foot into the back of his knee. His agonized scream was like a balm to my soul. I didn't care how many years of freedom this could cost me, it would be worth it. Especially when I got a brief glimpse of the woman and saw her tears mixing in with some blood on her cheek. So not only had the bastard struck her, he’d done it with some kind of object that had torn her delicate skin.

As the man knelt at my feet and cried pitifully, I reached for his right hand. The sight of the heavy gold ring had the rage inside me going from dangerous to full-on murderous. To cause the damage that he had, he would've had to have hit the woman with a closed fist. A blow from a man his size could have easily incapacitated any opponents. The young woman was lucky to still be standing.