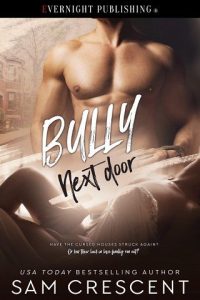 Since when did Verity Hill become fucking gorgeous?

Since when did he become a stalker? Checking out his neighbor in the backyard as she weeded her rose bushes? He’d never done anything like this before. Hector Carter never stalked. He never needed to. Women were always falling all over themselves to get close to him. This wasn’t the kind of man he was. Certainly not for a woman who threw a drink on him the first day they moved next door together.

But here he stood in his back bedroom, which he’d turned into an office, staring at the woman he’d once bullied throughout high school. This was his punishment. The geeky, awkward girl he remembered from way back then was nowhere to be found. Instead, she was a curvy-as-fuck, beautiful, raven-haired siren, and she had him gawking out of bedroom windows just to get a look.

Even now dressed to work in the yard, those full tits of hers were on display. The depth of her cleavage alone made his mouth water. He’d always been a tits man. Ever since he knew what breasts were, he’d loved them.

He came to this fucking house in a small town to get away from all kinds of stress. Not to have more added to it. Running a hand down his face, he tried to clear his thoughts, but all his dick wanted to do was go out to her, strip her naked, and fuck her.

“You do realize you’ve groaned at me three times in the space of five minutes,” his business partner and best friend Sean Logan said.

“Look, when did she get so gorgeous?”

“Verity was always gorgeous. She was nice as well,” Sean said.

He’d called Sean the instant he’d gotten a drink thrown at him. Of course, Sean would remember her. His friend knew a great deal about the beauty. She had gone to culinary school for a couple of months until she dropped out, traveled around Europe with her mother, and in the process of doing so, built up a strong social media following with her cooking and traveling. Her audience adored her. From what Sean told him, Verity had taken a break to work on her first cookbook. From time to time, she still posted videos of her cooking, but not as many as she once did.

He couldn’t believe how amazing she was.

There had been many nights when he watched through some of her videos, laughing along with her. She knew how to engage. As the years had passed, her confidence had grown. In the beginning, she always hid behind oversized shirts and pants. Overnight, it was like the woman found herself, and now they lived next door to each other.

Verity lifted up, put her hand to the base of her back, and wiped the sweat from her brow. It was boiling out.

He wouldn’t be doing any yard work. It was what he paid people to do, but one look at Verity and he might be willing to offer his services to do all of her work.

“Dude, you wouldn’t have seen it. Back then, all you cared about was the easy lay. You and I both know that. You didn’t even talk to me back in high school, remember? Not when anyone was looking.”

Hector groaned. “Don’t remind me what a dick I was.” He hated that about himself. He’d succumbed to peer pressure. Since they were kids, he and Sean were neighbors. They were the best of friends. He’d become athletic while Sean had been more the books and computers. Not once had he ever bullied Sean. They just had an agreement. Neither of them talked in school.

“Hey, I was just as much a dick, remember? I didn’t want you talking to me either. I’d have gotten a bad rep and all that,” Sean said.

“Don’t say it, man. If there is anything, I will come to you straight away, but we’ve got this. We’re a team.”

“Do that meditation stuff. Read a book. Watch some movies. Just … relax.”

They said their goodbyes, and Hector looked out of the window to see Verity already clearing away. Her garden looked perfect. She spent a lot of time outside. He’d seen her sitting there, legs crossed, looking through notebooks and what appeared to be folders as well.

He had to stop stalking. It was creepy. This wasn’t how he intended to spend his vacation.

Moving away from the window, he tossed his cell phone onto the bed and made his way downstairs. Before he realized what he was doing, he was out of his front door and knocking on Verity’s.