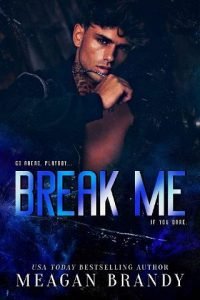 Half a Man – Dean Lewis

Power Over Me – Dermot Kennedy

Back To The Start – SoMo

Tension lines my forehead, a heavy throbbing taking over not only my head, but my entire body. I try for a full, deep breath, but my lungs refuse my desperate plea.

The fiercely pumping blood and heavy pounding heart should clue me in to what’s coming, but I ignore the warning, stuck in a nightmare of my own making.

Someone’s scream roars around us, but I can’t say who it comes from. It’s a deep, cavernous sound that sends panic across the room and ice through my every vein.

I’m stuck, frozen, knowing the move to follow before it’s even made.

It’s the last-ditch effort, the one that leads to the end, right here in this very spot.

Everyone else understands it, too.

The body behind me grows rigid, the shadow to the right now creeping closer, a dark and haunting chill charging the air around us.

I’m suddenly spun, rushed toward the door and shoved through it.

I pretend to go easily, but slip away, sliding on my feet and darting around the far side of the room.

The eyes trailing me shoot wide, and I’m lunged at, but I’m already too far gone.

I intend to approach them from the side, to bring life back to the dead eyes bound to find mine, but as I get closer, no more than two spaces away, the inevitable sears my soul.

It hurts, stings, but only for a second and then ...

He thinks he’s sly, laying back in the seat of a car that can’t possibly be his, playing PI, and sucking at it.

I mean, come on. He sits in plain sight, laughing and chatting with the guy behind the wheel, smoking on something he definitely didn’t buy here, while he waits for what, me?

For some sort of grand exit where I’ll flip my hair over my shoulder and push my chest out, paint my lips bright and do my best dirty work to draw him right in, all the while he’ll be laughing in his mind, planning the move he’ll then make on his friends little sister.

He’s parked directly in front of my aunt’s house with the windows rolled down and doing nothing to hide the sound or smell coming from the vehicle.

He simply doesn’t care, because he knows he’s untouchable, it’s written in the way he pushes the passenger door open and steps out into the murky air with the ease of a rogue rebel.

This guy, he comes from a place so far from this one it’s not even funny.

Here, teenagers get drunk on tailgates on dirty riversides. They camp out and are welcomed home the morning after by loving mothers and fathers with smiles and biscuits and gravy. They fight over girls or guys or whose fault it was for the points scored by their rival teams from the night before’s game. Simple, everyday stuff.

The world he comes from, teenagers are a thing of the past, the parties at mansions, parents irrelevant, and the fights far crueler. It’s a town founded and ran by an ethically challenged power family, void of a justice system.

There is a justice system, and it consists of three rough and ruthless eighteen-year-olds.

Three adopted siblings born for a purpose greater than those on the outside could ever understand.

The brothers of Brayshaw.

One of which is sitting outside my house this very instant, waiting.

It won’t kill him to wait a little longer...

Scanning the fenceless houses of the tattered block, I step into the large open grassy area, and bring myself closer to the one with the rickety back door and busted ass blinds.

There’s a random bench dropped in the center of the yard, so I plant my ass onto the old, splintered wood.

“Why are you sitting in my back yard staring at my house?”

I hop right the fuck back up, spinning to glare at the mini-chick raising her brows at me.

I don’t say shit as I eye her, and she crosses her arms, popping a hip out while she waits. The girl can’t be more than, fuck, I don’t know. Five-foot max. Maybe.

I hop over the bench, pushing toward her, and her chin lifts to the sky—the only way she’s able to keep hers on mine—but she doesn’t inch away.

“Why are there no fences around to keep people like me out? To stop me from staring at your house?” I counter.

“Because this place is as safe as safe can be.”

“No such thing, baby girl.”

“The worst that happens here is Tom Marvel down the street waters his yard on even days instead of odd.” Her mouth gapes as she mocks shock, tilting her head.