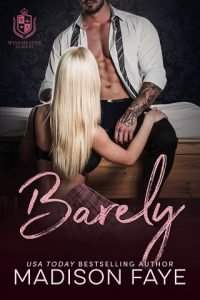 She looks like heaven and moves like sin. Soft, sultry music pulses like a lover’s touch over the club’s sound system, and under the sensual blue and pink lights, and through a fog of fake smoke, her hips sway as her hands slide up to grip the pole tightly.

And there’s something about her that has all of my attention.

Yes, you could assume it’s that she’s wearing next to nothing—just this sky-blue, lacy, basically see-through bra and thong panties that hug every single part of her perfectly sculpted body like they were painted on. You could say it’s that she’s grinding her hips and sliding her hands over her body in a way that’s designed to get a guy like me hard.

But it’s… it’s hard to explain, but it’s more than that.

For one, she’s no pro, that’s pretty easy to see. In fact, I’d almost say she looks nervous, even though there’s not really a ton of people in here tonight, and even though she’s wearing a black masquerade mask that totally obscures who she is. Her moves aren’t practiced, either. It’s like she just got done watching a how-to video of “dancing sexy,” and this is her first time trying to remember how to do it.

Secondly, strip clubs are not my scene. Not by a fucking mile. Maybe it’s that I just see through the bullshit that they are? There are guys who walk into a strip club and swallow that fantasy pill whole. The girl is “totally into them,” and she “totally just gave them her real name. No, really, bro.”

You know the type. But me? Nah, I’m not that type. I see through the illusion. Or maybe it’s just that a woman hasn’t turned my head—stripper or otherwise—in years.

But in any case, with both of the reasons there, here I am just fucking staring at her. Mesmerized, hooked. Like the animal inside of me that I’ve kept chained up finally has the scent of prey hitting its nostrils for the first time in far too long. And now it’s fucking starving.

There’s the taste of overpriced mid-level whiskey on my tongue, the faint scent of cigar smoke wafting through the air. And around me, Dan and the rest of my “buddies” are cavorting around, knocking back shots, cat-calling girls, and generally doing exactly what you’d expect of a bachelor party of thirty-to-forty-year-old guys to be doing in a strip club.

But not me. I just watch, my pulse thumping in my neck and my muscles clenching and unclenching as my eyes follow her every move.

I’m startled from my thoughts by two sweaty palms slapping my shoulders from behind. And that’s saying something, because I never startle. I glance over my shoulder at the man of the hour, Dan, my old college roommate from what feels like a lifetime ago. A life before war. Before I met death and chaos. A life before the Special Forces.

“Great, buddy. Listen, thanks for the invite. I know it’s been a wh—”

“Bro, have you checked out the tits on that Asian chick over there?”

I’ve changed a lot in twenty years. Dan has not.

“Must have missed that,” I growl, rolling my eyes as I look away and take another sip of the twenty-dollar pour of Maker’s Mark in my glass.

Dan chuckles. “Guess you were distracted.”

He grins and nods at the stage I’ve been staring at, and there she is, still dancing. Still utterly captivating me.

“Dude, she is so fuckable.”

My jaw clenches tight. Very, very tight. About as tight as my fist on the glass of whiskey, which feels like it might shatter any second. I understand the place I’m in. And I understand what her job is. But the idea of anyone—of any man at all—looking at her like that, or thinking of her like that, has my blood boiling.

“Take it easy,” I growl, instead of smashing my glass over his head or throwing him across the room.

He grins, and in the spirit of where I am, and allowing that Dan is wasted, and further allowing that in all likelihood, the wedding next month will be the last time I ever see Dan, I force a smile back.

“Nope! Not taking no for an answer, bro! It’s my bachelor party, and if you want her, she’s yours, man.”

The growl rumbles in my throat, but he can’t hear it over the music. The music suddenly switches songs, and when I glance back at the stage, she’s walking off of it.

My eyes scan the room, but she’s gone, and I shake my head. The fuck was I thinking anyways?