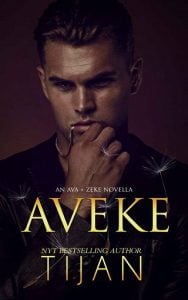 I watched him in high school. Knew his reputation. Knew he was wealthy, privileged, and mean.
He ran the show back then, a partier and a player.
Then he came back from college, back to the town I never left. He’s different now.
He comes into the bar, and I know his routine.
I know which stool he’ll pick.
I know his favorite drink. I know which sports team he’ll want on the television screen.
And I watch as he gets hit on.
Sometimes he leaves the bar with a woman. Sometimes he doesn’t.
But I’m always there, tending to his drinks. He gives me a smile and a polite nod back.
Then one night, after a long appraising stare, he asked, “Ava, why are you single?”
I leaned in, told him a lie, knowing the truth.
What I didn’t know was that my world was about to shatter after that night.
Something else I didn’t know: would the man I watched all those years help put my heart back together… or smash it into pieces?

** A 42k novella written as a standalone from two characters in the Fallen Crest/Roussou universe.

He was here. Again.

This was, what? The fourth time this week. Eight sharp. The last four evenings in a row. And he came in, took the stool at the far end, and sat. Just sat. His head bowed. He took a breath before he lifted his head, and he paused, like he’d needed one second before readying to slip on the mask that the rest of the world saw. Then he tipped his head back, his eyes went to the television right above him, and as Brandon gave him a beer for the night, he’d sip and watch his best bud play soccer on the TV. And like tonight, if it weren’t his best friend’s team playing, we’d switch it to another game. Score if it was someone we knew playing, because around these parts, that wasn’t that uncommon. But not tonight.

There was a hockey game, but not the team he liked to watch.

Brandon wasn’t working tonight since I had told him twenty minutes ago that I’d close for him. Brandon had a woman, and he was happy, so he was starting to let me close most nights for him. So tonight, I moved down the bar, meeting Zeke’s eyes briefly before he saw me reach for a tall glass and pour his favorite beer from the tap.

He was tired. I caught the wariness before he switched. A wall came over him, and then he reanimated to the cocky jerk that most people took Zeke Allen for being. Wealthy. Preppy. If that was still a descriptor for someone our age. We’re in our twenties, so I suppose instead of preppy, we could use the word ‘blessed’ to describe him. He didn’t seem like he aged.

Muscular. Big broad shoulders. He had the physique of a bodybuilder. Dark blond hair.

A very big square jawline, but it was so prominent, that it alone could get so many women in bed with him. I’d seen him in action many a night, and he never had to work hard. He tended to buy them a drink, ask them how they were, and within a few minutes (always depending on how long Allen wanted to chat), they’d head out.

Zeke was gorgeous when we were in high school, not that he and I attended the same school. With our neighboring towns, one could say I was on one side of the tracks and he was on the other. The privileged. He went to a private school, which seemed to get more private and exclusive as the years passed, and I was from Roussou. It used to be a good place, alive and thriving, and then it took a turn and not many seemed as privileged there anymore. I think it was doing better these last few years due to some local businesses that brought in a bunch of people, but still…it was hurting.

I finished his pour and took the remote for the television. Placing both before him, I gave him a nod. “Think Kansas City Mustangs are playing tonight.”

He grunted, took a sip, and picked up the remote. “Thanks, Ava. Thinking I’d like to watch the Javalina tonight.”

He was already changing the channel before I turned to fill another order.

I knew Zeke would sip his beer and want another in twenty minutes. Then a third on the hour. He’d stay almost to closing, stopping long before he’d need to drive to sober up. Once a guy with the reputation for being a bully and an obnoxious jackass, he wasn’t like that anymore.

Eyeing him from the corner of my eye, I wanted to ask what happened to change his ways. One day.

We were on beer number four of the night. He was on this round a little after one in the morning. We closed at two, but if Zeke needed extra time, I wouldn’t kick him out. He could stay while I closed up. I had no problem with that.

I grunted, sliding his beer over to him. We were on the late-night sports highlights, and the place was going strong. It didn’t bother me. I was the only one behind the bar, but I had a system down.

I grinned. “Why? You volunteering?”

He grinned back, a chuckle before lifting his beer. “Just seems weird. You were with that Roy guy for a while, and then…” His eyes grew distant, and his head cocked to the side. He was thinking, trying to remember my love life, but he wouldn’t remember because while he went to a D1 school, I stayed home and attended the local community college. There’d been plans for more, to finish and go on to graduate school, but life got in the way.

I knocked my knuckles on the counter in front of him. “Don’t think too hard, Allen. I’m single because I want to be.” I moved down the counter. Three women had been eyeing him all night, and they were on their fourth round of shots. The one who’d been paying all night waved more money toward me, so I started reaching for three more shot glasses.