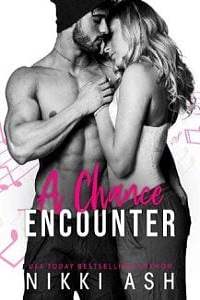 “Three Redheaded Sluts.” I drop the shot glasses onto the bar top and the three women thank me.

“To redheaded sluts,” one woman—a brunette—yells over the blaring music. “And may they all burn in the pits of fiery hell.”

I feel ya, sister…

The other two women—both blondes—cheer in agreement as they lift their glasses, clinking them against each other, before they tip them back and swallow down their shots in one fell swoop.

“Hit us again!” the brunette chimes, smacking her lips together. “I refuse to leave here a second before I’m so drunk, I forget the asshole who cheated on me with that redheaded slut!” Her words hit me hard, but I push them down. I’m working, and I need to make money so I can enroll in college in the spring. I don’t have time to focus on anything else. Focusing on other shit is what got me into this mess in the first place.

“You got it.” I plaster on a fake smile and grab the three glasses, dropping them into the dirty bin, then go about making them all over again. More drinks equal drunker people, and drunker people equal bigger tips. And I like big tips.

I pour Jägermeister, peach schnapps, and cranberry juice into a shaker, fill it with ice, then grab the top to shake it up. As I’m pouring the drinks into three clean shot glasses, my eyes lock with him. He juts his chin out, and the corner of his lips curves into a smirk. The same smirk that lured me to him, that had me fooled. Not anymore, asshole.

After I set the ladies’ drinks in front of them and add them to their tab, I make his drink of choice, then walk over and show it to him. “Whiskey sour… with a side of fuck you, you lying, cheating asshole!” I toss the drink at him, drenching his face and shirt with the caramel-colored liquid.

“What the fuck!” Freeman booms, jumping up and grabbing napkins to wipe his face off. “What the hell is your problem, Sophia?” He tosses the soaked napkins onto the bar top.

“My problem is, I saw you on television”—I come around the bar and point my finger in his chest—“with a redheaded woman, who’s apparently your fiancée.”

His eyes widen, and for a quick second, I think I see a hint of remorse, but then his blue eyes go arctic cold. He grabs my wrist and pulls me down the darkened hallway that’s designated for employees only and into the storage closet, where we had sex for the first time, several months ago. “What did you think?” he hisses, once he’s slammed the door behind us. “That what we’ve been doing meant I wanted to spend my life with you?” He chuckles evilly, the sound making me want to vomit.

“I thought…” I swallow thickly, knowing what I’m about to say is going to make me sound pathetic—but still I say it anyway. “I thought you cared about me.”

He scoffs. “I thought you of all people know how the real world works. You’re a bartender who lives in a trailer park with her white trash mom, and I was looking to get my dick wet.”

His words do as he intended, cutting me to the bone. I confided in him, told him about my family, how my dad up and left when I was eight and started a new life with another family, leaving my mom and me to fend for ourselves. She lost our home, and we were forced to move into a single wide mobile home. He told me where I live doesn’t define who I am. He said he believed in me. When I told him I want to go to law school, he told me I could do it. Now he’s throwing my truths in my face.

This is not the same man who told me I was beautiful and made love to me in his bed, night after night. Who told me how thankful he was that he stopped into this bar one night on his way home from work. This guy is someone completely different. Closed off, cold. Devoid of all emotions.

“My fiancée is the mayor’s daughter. She’s a college graduate from Berkeley,” he continues. “I told you I have plans, and those plans could never include someone like you.” His eyes and tone convey disgust, and even though I’m a fairly confident person, I suddenly feel like a light is shining brightly over me, emphasizing every one of my flaws. “We’re from two different worlds, Sophia. You were good on your back, but you’re not wife material.”

Tears sting the backs of my lids, but I refuse to let them fall. Fuck him and the high horse he rode in on.

“Does she know what her fiancé has been up to?” I accuse, choking back a sob that’s threatening to break free. “That he’s had another woman in his bed for the last several months? Where does she think you are right now, only hours after announcing your engagement?”