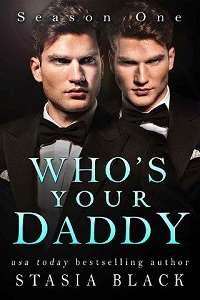 I’ve felt like Alice falling down the rabbit hole ever since I met the Mavros twins three months ago.

Naïve little virgin that I was. Ha!

Now look at me.

It'll be the story of the century if anyone ever finds out. I can just see the headline: Who's Your Daddy?

Because the thing is... we’ll never know.

DNA tests are only so-so accurate when it comes to differentiating between familial relations. We’ll never truly know which brother's child rests in my belly right now. Dear God. My cheeks flame. As usual.

What would Daddy say if he could see me now?

But I'm getting ahead of myself.

Let’s go back to the beginning, when once upon a time, a naïve publicist walked into the office of one of Hollywood’s most rich and famous at the request of a friend—an acquaintance, really.

If only I’d had any idea that was a day that would change my life forever. My hand drifts down to my ever-expanding belly.

At least I would have worn a different outfit, that was for damn sure.

I tried to keep my head high and act like I belonged as I walked into the LA high rise to meet with one of the biggest stars in the industry.

Holy crap. I was actually here to see Leander frickin’ Mavros! He was only one of the hottest up and coming young actors of our generation. He already had two Emmy’s under his belt. And after another critically acclaimed season of his popular Netflix thriller Gemini, I had no doubt there’d be a third this year.

Of course you belong, Hope. Self-hype was all the rage in therapy these days. Well, that and attachment theory. But thanks to dear moms and pops, I was screwed over attachment-wise (avoidant attachment-style here ftw), so I might as well focus on the first. Positivity.

You can do this!

Just look at how far you’ve come in less than a decade!

It was true, I had been publicist to some of the hottest young tween starlets of the last decade. I mean, just calling me a publicist was a joke. Unofficially I’d been everything from babysitter to mother-figure to confidant to those girls.

There was a reason the starlets I managed never self-imploded like so many other young stars did. I kept them on the straight and narrow. And I got them into therapy and heard a lot about it secondhand.

My most recent client, Makayla Mitchell, was starring in that big new superhero movie everyone had been talking about lately. And Destiny, my first mega client, just finished her first solo R&B tour, selling out tickets in arenas worldwide. It was success beyond all of our wildest dreams.

And the fact that I’d helped not one but two stars navigate the industry through their awkward teenage years—when so many of their peers had flamed out with drugs, sex scandals, and predatory parents or other family members—apparently, someone had noticed. The fact that I was here today was testament to that fact. To be here, in the lobby of one of LA’s most exclusive talent agencies to meet with either Leander or his twin brother Janus? It was a big deal.

My contact Milo hadn’t said much over the phone, just that they had some publicity problem they needed outside assistance with.

Other than that, I had no clue what it was about. I always had my ear to the ground when it came to the inner circle gossip and the only buzz about Leander lately was surrounding his first big blockbuster movie coming out in a week. It was his big break from TV into movies. So far reviews had been good.

But what if it wasn’t Leander I met today, but Janus, his twin brother? Janus didn’t act anymore, but he co-managed his brother’s career with Milo, their longtime best friend. All three had been child stars together. The twins co-played a famously adored little kid on a beloved sitcom in the early aughts.

As teenagers, both twins had been heartthrobs. So many girls at my school had pictures of them in their lockers. Not me, naturally. I’d been lucky enough that my freaky-religious parents even let me go to public high school.

I took a deep breath as I pushed the up button on the elevator. I couldn’t think about any of that now. It had been years and years ago. Lord knew I was worlds away from the girl I’d been as that shy, sheltered little teenager.

As the elevator doors slid open and I stepped inside, I glanced at myself in the full-length mirrored walls. The lift of the elevator made my stomach swish, and I took a moment to really examine myself.