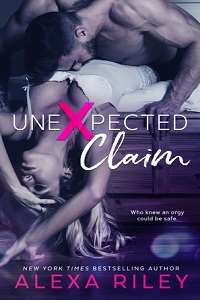 I inspect myself in the mirror as I do a little turn. I think it looks cute. I reassure myself as I try not to think how crazy this is to begin with. I have a feeling Reba isn’t going to like my outfit much. I already know she’s going to show up looking like a sex kitten. She dresses like a vixen every day, but I have a feeling tonight she’s really going to push the envelope. It’s something I’ve loved about Reba since I met her a year ago after I moved in across from her. She shakes up my world, and I know I’ve needed it.

“Open up, my sacrificial virgin!” she yells through the door while banging on it.

I slip on my flats as I run out of my bedroom to go and greet her. Luckily we are the only ones who live on this floor. There are four other units in our building not counting the bookstore we sit on top off. I pop the lock and the swing the door open.

“The sacrificial virgin thing was a joke.” Her eyes run over me as she welcomes herself in.

I look down at my outfit. “It’s cute,” I say defensively.

“That’s the problem.” She smiles knowingly at me. She knew I was going to wear something like this.

I look at her outfit and see the very big difference between us. She’s in a red dress that looks like it’s been painted onto her dark skin. The top is so low cut that I bet a nipple could pop out at any moment. She’s completely done up. Her black hair is in curls and her makeup is flawless. Reba has a body made for sin. She’s like one of those pin-up dolls with curves in all the right places. I could never fill out a dress like that.

I’m tiny everywhere and it feels like it even more as I stand next to her in my simple white dress. The top hugs my small boobs and flares out at the hips. It’s one of my favorite dresses because the material is lightweight and perfect for a Chicago summer. But this dress could easily be worn to any function and it’s nothing like what Reba has on.

“Look!” I turn around to show her my back. There’s a small slit that reveals a little skin. It’s not much, but I’m trying.

“Your hair looks good.” She reaches out and touches one of my white-blonde locks. I love my hair. It’s got some wave in it and I never have to put in much effort. It’s easy but still pretty.

“Thanks,” I say and go to grab my purse.

I glance down at my feet, then over to hers.

“Don’t you have something else?”

“Yeah, I think.” I make my way back to my room and grab a pair of heels. I sit down on my bed and wrap the straps around my ankle and up my calves before I buckle them.

I walk back into the living room and Reba laughs. “Those are wedges, not heels.”

“They’re adorable,” I protest as I turn around to show her. They are white with a bow on the back of the heel.

“You’re what’s adorable, Ivy.” She reaches in her little purse and digs for a minute before pulling out lipstick and handing it to me. “This will match well.”

It’s a soft pink with a little sparkle. I walk over to the bathroom and put it on.

“While you’re in there, lose the bra,” I hear her say.

I debate it for a moment but finally give in, taking it off and looking at myself in the mirror. You can almost see my nipples. I step out and show her, pointing right at them.

“Or turned on,” she interrupts, but I ignore her.

“I know.” She wiggles her perfectly shaped eyebrows at me.

“I can’t believe I’m doing this,” I mumble and finally pick up my bag.

I bite my lip knowing she’s right. I don’t really think about it. It’s an afterthought, and I don’t put myself out there.