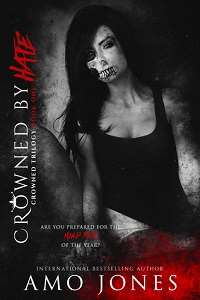 “Isa, pick your chin up and smile. I taught you better than that.”

Swooping up my wine glass, I empty the contents down my throat.

“Well, I beg to differ. Why can’t you just be like your sister?” Lydia quips, eying me up and down.

“Well, I don’t know, Lydia,” I mutter sarcastically while smiling politely at a passerby. Because it’s one of the nights my father gives me and my sister the pep-talk to behave ourselves, I have to be on my best behavior. Only he doesn’t need to drill everything into Brianna’s head like he does mine, because she understands it. She knows how to handle herself—apparently I don’t, being the delinquent and all. But, I don’t see her here tonight. Oh no, perfect big sister is shacked up studying Harvard Law.

“Maybe it’s because I have a thing called a backbone and a mouth?”

“That’s a cheap stab at your sister and you know it, Isa. Stop this.” My eyes go over Lydia’s ridiculously perfected chiffon bun and land on my father, who has his salt and pepper hair slicked back to show his strong features and bright blue eyes. My dad was strapping when he was younger, but age has not been kind to him. Or maybe that’s karma.

“My favorite girls.” He grins, his arms stretched out wide.

“Great,” I murmur from around the rim of my glass. “Dad is extra cheesy tonight.”

A foot hits me under the table and when I look up to Lydia, I catch her glaring at me. See, keeping up appearances is what my family is all about. Since my father not only has his fingers in all sorts of dealings in the US, and by dealings, I mean he’s a shady individual, he’s also the president of the United States of America—blah blah, that’s why it’s imminent that I’m on my best behavior constantly, and even more so while we’re at one of the many events we attend together as a ‘family.’ Family is a strong word to use, though. What I have, is more like a business gathering where we all barely tolerate each other—not so much a family.

My father continues to walk toward us, pulling out a chair beside his and then taking a seat. Another figure catches the corner of my eye, but I don’t look toward it because I’m too busy counting the new wrinkles that have carved into my father’s forehead, though it probably looks like I’m openly glaring at my dad in annoyance. I can neither confirm nor deny this assumption.

“Isa, I want you to meet Bryant Royal. The CEO of Royal Enterprise.” He ends his sentence with a tinge of urgency and warning, obviously hoping I’d catch his drift to behave myself. I finally bring my eyes to the man seated beside him and I have to stop my mouth from dropping open. All tied up in a sharp well-tailored suit is probably the most stunning man I have ever laid my eyes on. His brown hair is shaved short on the sides and slightly longer on the top—long enough to run your fingers through— and I wince slightly at how his green eyes watch me with burning intensity. Why the fuck is he looking at me like that. Just as I’m about to gear up with my flashy ‘I’m the President daughter’s smile,’ his lip curls up in disgust.

Fuck being polite to this prick. The way his cocky eyes narrow on me, he obviously knows how hot he is, which means, I won’t be fueling that ego.

He’s maxed out of ego fuel.

I look to my father and watch as his eye twitches in slight annoyance.

“Hi.” I lean over the table, placing my hand out to him with a very forced and very toothy smile on my face. I mean, you could count all my teeth from across the room, that’s how wide this smile was. “I’m Isa.”

He looks to my hand, then looks up to my face, then back to my hand. Said hand is getting very tired waiting for his prick hand to accept. His angular jaw clenches a few times before his penetrating eyes pierce through mine with such hate, I almost flinch. Don’t you fucking flinch.

“Bryant.” His voice. I wish it was ugly and ratty. However a rat would mutter the word ‘Bryant,’ but I wish it was like that. Instead, it was like, you know when you take that first spoonful of a molten lava cake, and the moist—yes, I said moist—cake melts away on the tip of your tongue, right before your taste buds get the ride of their life with the rich creamy sauce that begins to slither down your throat?

I tug my hand away, slightly ashamed at how obvious he was at rejecting me. What the ever-loving fuck did I ever do to him. Or maybe someone pissed in his million-dollar cornflakes this morning.