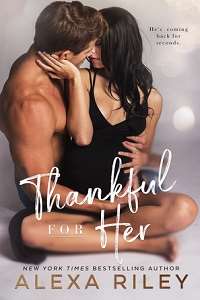 I stand in the hallway looking at his picture, something I shouldn't be doing. I'd die if anyone found the secret picture I had of him hidden away in a drawer in my bedroom. But this huge portrait on the wall is nothing like the one I’d stolen.

He’s the man who takes up too much of my thoughts. When I was sixteen his father married my mother and my secret obsession began. I was only sixteen at the time, but even two years later, I’ve yet to meet him.

My mother and new stepfather were married before I could even blink. Not that I minded. I love Neil and he’s always so nice to me when I’m home. He makes me feel welcome, and he’s wonderful to my mom. He even went as far as to try to talk me into coming home from boarding school and going somewhere close by. It was a nice offer, but I politely declined.

Not because I didn't want to, but because my mother would never want that. She’s always trying to get me out of her hair as fast as possible. It works out fine because I don’t want to live full time with my mother either. She's a hard woman to please and I find myself trying to make her happy even though I know it won't work. I can't help myself.

I may not love boarding school, but I’m used to it. I like being there more than I ever liked being home. Though the silver lining to coming home is seeing pictures of Hunter. Every time I’m visiting I pray he shows up and I can actually meet him. But so far no such luck.

This time, though, I’m set to be home for eight weeks. Normally I'd make plans to do something with a friend over the Thanksgiving break, but Neil insisted I come home. He made a big deal about having a family dinner together and how he was going to get a giant turkey so I had to come eat it. My mother wanted to appear like she was a good mom and went along with him. It’s something she does when she has a new husband. She pretends to care when they’re around. Normally it doesn’t bother me, but with Neil it feels different. He's not a jerk like most of my mother's exes. I like having him as a stepfather.

An arm wraps around my shoulder and I look up to see Neil standing there. My cheeks warm a little as I wonder if he saw me staring at Hunter. The wall is littered with pictures, so maybe he thinks I was looking at all of them.

“She's beautiful, isn't she?” My eyes follow Neil’s line of sight. He's looking at a picture of his deceased wife. Hunter's mother.

She looks nothing like my mother. She’s a bright light with blonde hair and blue eyes and full, round cheeks. My mother has midnight-black hair and dark eyes. Sometimes I think she looks like a porcelain doll. Her face is unmoving and her skin is flawless.

I can tell from the picture she doesn't have a personality like my mother’s either. The woman is sitting at a table littered with paints, brushes, and drawings. It's a mess and there are two little boys in her lap. Hunter and his brother Vance. They’re both kissing her, their little hands are in her hair and on her face, getting paint everywhere. She’s laughing. The picture is so beautiful it makes my eyes water. I know two of the people in the picture are gone and it destroyed Neil’s life. I can tell he misses her. The look of loneliness is always on his face. I adore Neil, but I don’t know why my mom did marry a man whose heart she’ll never have. It’s clear one women would forever hold it and she’s gone. Then again, I guess it was never love my mother was after. It’s always about money and social standing.

“It's like I've lost them all,” he says so quietly I almost don’t catch it.

If I had to guess I think he’s referring to the fact that Hunter doesn’t come around much. Then I wonder if the Hunter Danvers in my head is one hundred percent fake. It breaks my heart a little to think I might have gotten it wrong. What if he’s cold and distant instead of what I imagine him to be?

Neil lets out a deep sigh. “You'll bring him back.”

I don’t know what he means by that, but he pulls me close and I lean my head on his shoulder. I’m not used to someone being so kind, and though it feels foreign, it’s so nice. It makes me wonder what my own father was like. And it makes me wonder how Hunter can stay away from a dad like Neil. If he were my dad I’d spend as much time with him as I could. Especially if he were the only family I had left.