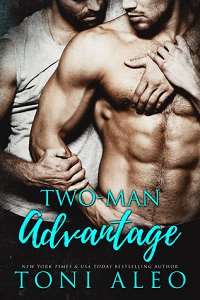 Wells Lemiere wasn’t sure what he was doing.

Standing in front of a fucking estate in Princeton, New Jersey, he could feel his stomach churn with nervousness as the brisk air burned his face. With his beanie and hoodie, he would have thought he would be fine, especially after growing up in Colorado and all. But nope, he was still freezing. He wasn’t sure what it was about New Jersey, but he didn’t like it much. Or maybe his dislike for the fine state had to do with so much more.

Looking up at the beautiful home, with the manicured lawn and perfectly trimmed hedges and the kind of windows that let all the light in, he knew Matty was somewhere inside. Probably sitting around the table with his family, eating and enjoying their company. The same family that didn’t know one of its sons was gay.

And very much in love with Wells.

Or so he hoped.

Swallowing hard, Wells made himself move toward the house. He wasn’t sure if this was the smartest thing to do. But they had been together for so long, over a year, they were in love, and damn it, Wells wanted more. He wanted the Christmas with the parents, the vacations together where pictures could be taken, and fucking hell, a life together. With the whole world knowing. Yeah, his friends knew, and his sister, but his parents hadn’t met Matty—for the simple reason Wells didn’t think it was right for them to know him when Matty’s parents wouldn’t ever know Wells. Since Wells loved him, he’d gone with it, but he couldn’t anymore. He needed all of Matty. He deserved that.

Taking the steps two at a time, he reached for the door knocker, seeing Matty’s family name gracing the front door.

And Wells was in love with one of them.

Swallowing back the bile that wanted to escape, Wells knocked twice as his heart jumped up into his throat. He wasn’t sure who would answer, and if it was Matty’s parents, should he introduce himself as Matty’s boyfriend? Wouldn’t that freak Matty out more? It wasn’t Wells’s place to out his boyfriend, but then, if he didn’t, would Matty ever? Yes, yes, he would. He just needed a little push, that was all. Wells thought the fight they had at the beginning of the week when Matty left for New Jersey would have been the push, but in true Matty fashion, he’d shut down and hadn’t spoken to Wells. Wells figured that meant Matty hadn’t told his family, so there he was.

Ready to fight for his forever.

Thankfully, he didn’t have to worry about what to say because when the door opened, Matty looked down at him, his brows jumping up to his hairline. He was wearing an awfully ugly green sweater, yet he was still so gorgeous. Thick jaw, beautifully shaped nose—obviously he had never played without a cage on his hockey helmet—and his eyes, they were just soul-crushing. Such an interesting shade of green that looked almost turquoise. “Wells.”

Shutting the door behind himself, Matty came out onto the stoop with Wells, his eyes wild as he shook his head. “What are you doing here?”

Ever so charming, Wells gave him a wide smile. “I wanted to spend Thanksgiving with you. With your family.”

Matty took Wells by his bicep, leading him down the stairs to the sidewalk. “You know that can’t happen.”

“I think it can. Just tell them the truth. Tell them who you are,” Wells pleaded, taking in the side of Matty’s face that was taut and filled with worry. “I will be right beside you.”

“Yes, you can.” Wells moved Matty’s hand from his arm, turning to face the man he had fallen so desperately for. “Matty, I love you. I will be there for you, support you, and damn it, I love you, baby.”

“Which is what I want, but I can’t tell my family. They just wouldn’t understand.”

“It’s not like how it was, Matty. It’s different now. People are more receptive.”

“Yes, your family,” Wells persisted, nodding his head and taking Matty’s hands with his. But when Matty pulled away from him and paced farther down the sidewalk, Wells’s heart sank.

“Because you won’t let me,” Wells said as he turned his back to the house he despised in order to face Matty.

“They love you, you’ve told me that. They’ll support you, Matty.”