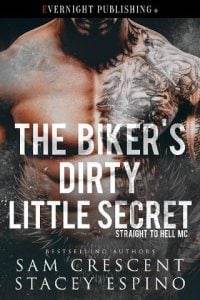 Heat radiated off the asphalt, the late afternoon sun unrelenting for the fourth day in a row. Brick craved to take his Harley out for a long ride, to feel the cool breeze against his heated flesh. But no, he’d be taking the pick-up truck with no AC into town. Lord’s old lady wanted to start raising laying hens at the club, so he’d been assigned to get all the materials to build a coop. This was definitely the last thing he wanted to be doing today, but no one refused an order from the prez. He wasn’t sure why Lord hadn’t asked one of the prospects to do this shit. As VP of the Straight to Hell MC, he had better things to do with his time.

He pulled the whiny door closed after climbing up into the driver’s seat. The building center was just on the outskirts of town, supplying lumber and other essentials to the area. He rolled down the windows, but even the air felt stale at these temperatures.

The drive was uneventful. He couldn’t complain about much these days. There hadn’t been any club drama for months, and he hoped it would continue. He was still getting used to Ally being a permanent member of the club. The prez’s old lady made Lord a father. Things were changing. Brick wasn’t sure how he felt about it.

He missed the days when he’d run into hellfire by Lord’s side. Now his prez was taking the cautious approach because he had a family to think about, not just the club. Women made men weak—there was no way around that fact.

The building center finally came into view up the road. Brick was sweating through his t-shirt and felt like shit. He couldn’t wait to get back to the club and take a long, cold shower.

He parked in front of the main building and hopped out of the truck. Brick always wore his cut, but in weather like this, he’d gladly break his own rules. He tossed his cut on the passenger seat and tugged off his t-shirt, using it to wipe his brow.

Brick grabbed the list Ally had given him and headed into the building. After entering the lobby, he closed his eyes for a moment and just breathed. The AC felt like fucking heaven.

He opened his eyes. A girl behind the counter stared at him.

“I can handle hot,” he said. “Whatever’s going on outside is next level.”

She giggled in response, a sweet feminine sound. He noticed her gaze roving down his body. He immediately patted himself down in response, feeling for an exposed weapon, but realized it was just because he was shirtless.

He was used to the club whores chasing after him, but this girl looked nothing like them.

“It’s terrible. I don’t have AC at home, so I’ve actually looked forward to coming into work this week. And trust me, that says a lot,” she said.

He stepped closer, leaning against the counter. People didn’t usually talk to him, especially local women. He was used to being feared. The chitchat was somehow refreshing. There was something about this chick and her classic girl-next-door looks that pulled down his walls. She wore her hair in a thick ponytail. It had to be a good two feet long.

Brick shook his thoughts away.

She pointed to the badge on her shirt.

He ran a hand down his face. “See, the heat is really getting to me. Nice to meet you, Callie.”

She bit her bottom lip, and it was sexy as fuck.

“I don’t think I’ve seen you around before. Do you live close by?”

It was at that moment he realized she didn’t know he belonged to an MC. In her eyes, he was just another civilian. And he had no desire to fill her in on the truth.

She leaned over the counter on her elbows and slipped him a card. He glanced at it briefly but was more entranced by the intensity of her blue eyes. She even smelled sweet, a subtle vanilla.

“Don’t tell anyone in the yard, but it’s a family discount. You may as well get some use out of it.”

He took the offering. “No family?”

She shrugged. “Just me, but the boss doesn’t need to know that.”

After a cleansing breath, she grabbed a notepad. “Let me get your order before I keep you here all day.”

Honestly, he didn’t mind. For the first time in a long time, he felt human. Back at the club, he was feared, idolized, sometimes hated. And he was dangerous. Addicted to violence.

“A chicken coop? I’d love to have chickens, but I think my apartment complex would frown upon that.” She winked.