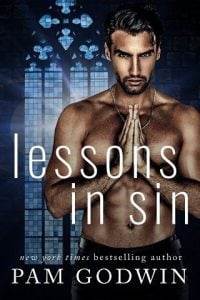 One measly blow job, and it all came crashing down.

My social calendar, my high school, my designer clothes… Even my silk pillowcases were taken away, my entire world downgraded in the blink of an eye.

My life was over.

There was no coming back from this.

Dramatic? Maybe. But I felt a very real sense of dread about my circumstances. It was one thing to be ripped away from my friends and family. But to be sent to an all-girls Catholic boarding school?

I didn’t know anyone here. The air reeked of damp wood and misery. Crucifixes hung on the walls like grisly omens. And the green plaid uniforms? Ew. The color was all wrong for my complexion. I wasn’t even Catholic.

This can’t be happening.

The sound of my footsteps echoed through the old, empty classroom as I paced along the wall of windows. Beyond the glass, the sun descended into the mountains, casting the school grounds in shades of lavender. It would’ve been a majestic view if not for the bars.

“This isn’t a school. It’s a prison. Or hell. I’m in hell.” Resentment snarled through me as I whirled toward my mother. “I can’t believe you’re doing this. It was just a blow job. You can’t lock me away for that.”

“This is hardly a prison.” Perched on a wooden seat in the front row, she didn’t look up from her phone. “Sion Academy inspires respect and admiration, two qualities you severely lack as of late.”

“Because I messed around with a guy? The Queen of England has done more than that at least four times. What’s the big deal?”

“The Queen of England is the longest-serving female head of state in world history. She didn’t achieve that status by engaging in oral sex with a Burger King employee. She earned it through duty, respect, and marrying appropriately.” Her chin snapped up, eyes blazing. “It’s your role as a Constantine heiress to do the same.”

Vomit. Literally, I puked in my mouth.

Caroline Constantine was all about arranged marriages. She wasn’t just the matriarch of our rich and powerful family. When my father died, she became the reigning head, the supreme authority of the Constantine dynasty, and the final word. Who was I to question her?

I was merely the baby. The youngest of six children. Also known as the precious princess. The belle of every ball. Teeny Tinsley, the nicest Constantine.

In other words, no one thought I had a backbone.

Well, fuck them. I could be just as ruthless as my mother, despite her overbearing efforts to portray me as sweet and innocent in the press.

“I’m eighteen.” I clenched my hands at my sides. “I can put my mouth wherever—”

“You’re a Constantine. Your mouth represents this family, and I decide what you do with it.”

I hated her for this. It was hard enough to maintain real friendships in Bishop’s Landing. But here? Hours away from home? I was doomed to spend my last year of high school alone.

Leave it to my mother to find a prestigious, high-status, all-girls school in the middle of nowhere. Sion Academy of the Sacred Heart was in an old New England village hidden in the foothills of the White Mountains. In fucking Maine.

As we waited to meet the headteacher, the isolation closed in around me.

A large tower projected vertically from the rear of the classroom, where auditorium-style seating stacked in tiers, overlooking the teacher’s desk and massive chalkboard.

The soaring domed ceiling made it all so very grand and open, but the heavy wooden desks and tarnished brass railings added darkness and gloom to the old-fashioned ambiance.

The first day of school officially began tomorrow. When I arrived moments ago, I caught glimpses of the residents in the corridors. Their aversion to newcomers rang loud and clear. For every unwelcome glare, I flung one right back, refusing to show weakness.

I couldn’t fathom sitting in this room among rows of prissy girls, wearing identical pleated plaid skirts, eager to learn and pray and conform.

I wanted to crush on boys, wear my own clothes, and live a normal life. Why was that too much to ask?

The blow job with Robby Howard hadn’t been my first. He was just another new guy in town, a college freshman attending the nearby university. He didn’t know he wasn’t allowed to touch me.

I would’ve given him my virginity, but just like with the others, my babysitting bodyguard had put a stop to that.

Maybe it was because Robby didn’t have a trust fund and had to work at Burger King to pay his tuition, but he was the final straw with my mother.

And here I was, facing the fallout.

Oh, I should have them. I should have a handwritten, tattered-around-the-edges journal full of them. Most eighteen-year-old girls did. But I wasn’t like other girls. I wasn’t allowed to make mistakes or have regrets.