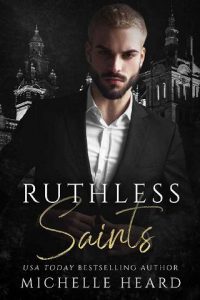 Who Are You? – SVRCINA

And So It Begins – Klergy

Who Will Save You? – Karie Garfield, Obeds

Here I Am – Tommee Profitt, Brooke

Freeze Me Out – Marina Kaye

Walking down the narrow street, people unconsciously step out of my way. It’s as if their sixth sense tells them to move; danger’s approaching.

Death follows men like me. We do the dirty work, the hunting, the torturing, the killing, while the reaper just claims the soul.

I was born into this life, so it’s second nature to me. What’s hard is fitting in with the rest of humanity. Acting like I’m one of them. Mundane. Helpless. Harmless.

There’s nothing safe about me, though. Just like my older brother, Alexei, and my late father, I’m an assassin by trade. It’s what the Koslov’s do best – kill. I’ve been trained by the best, able to end a life in a couple of seconds.

I’ve made Saint Luc my home because it’s a small village in the Swiss Alps. Quiet and peaceful. My place is further up in the mountains but not completely cut off from civilization.

Secluded enough to see an enemy coming and to not have to interact with any neighbors.

Walking into one of the local bars, I take a seat at the end of the bar. It gives me a perfect view of the entire room. I spare the other patrons a glance then take out my phone to look over my latest contract.

“Hi,” I hear a feminine voice, and my head snaps up. A girl I haven’t seen here before smiles at me from the other side of the counter. For a moment, I can only stare.

I guess her to be in her early twenties, with light brown hair, gray eyes, and breathtakingly stunning features. I’ve seen some beautiful women in my life, but there’s something about this girl that actually grabs my attention.

Discreetly, I turn my phone over so she won’t see the screen.

She tilts her head, and her smile grows, and the brightness of it chases away the darkness skirting around me.

“What would you like to order?” she asks as a dimple peeks from her right cheek, making her look like the definition of cheerfulness.

A slight frown forms on my forehead. “You’re new here.”

She nods. “Started yesterday.” She looks happy about the fact and even does a little wiggle, which I have to admit is cute.

“Coming right up.” She begins to turn, then pauses, “Oh shoot, I almost forgot. I’m Hailey.”

I nod then watch as she gets to work.

The tracker in me starts to wonder where she’s from, what she’s doing here, and how long she’ll be staying.

I tear my eyes away from her, and turning my attention back to my phone, I clear my mind and focus on my upcoming job. I’ve been contracted by the Terrero Cartel to take out Allessandro Ramos. He tried to move in on Terrero’s turf, which was a stupid mistake.

After the job, I plan on visiting my brother, who’s situated in Los Angeles.

I hear bubbling laughter, and lifting my gaze to Hailey, I watch as she smiles at a regular on the other side of the bar. Then she says, “I’ve always wanted to see Switzerland. I plan on spending a couple of months in every town.”

My eyes drift down her body. She’s taller than most women, and with curves in all the right places, Hailey could easily pass for a supermodel.

“Your parents okay with it?” The regular asks.

“Where you from?” he asks with broken English.

Christ, people are nosy as fuck.

“Bollingbrook. It’s in Illinois.” The regular shakes his head, so Hailey adds, “Chicago.”

I lower my gaze again, my attention returning to the job. I hate Columbia. It’s fucking hot and overcrowded there. With Ramos living in Medellín, I’ll have to scope the area and check his routine before I decide on how I’ll take the hit. It’s worth the five million dollars I’ll be paid.

I feel movement and glance at Hailey as she walks toward me with the drink. She gives me another blinding smile as she sets the tumbler down on a napkin. “Will there be anything else?”

I shake my head, and instead of her getting back to work, she says, “Lars says you come here often.”

I hate giving any information about myself. One slip up, and it can cost my life.

After careful consideration, I answer, “Yes.”