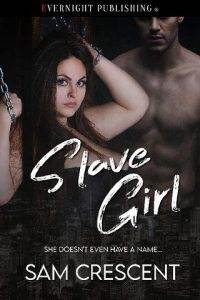 Raphael Giavanni knew he’d fucked up. No one ever stole from a Giavanni and even though the head of the mafia was his family, he’d stolen from them. It hadn’t been drugs or money; no, it was a girl.

A young girl with no name.

A few years ago, when he first noticed her, he’d asked her what her name was. She didn’t have a name, not a real one. She’d once told him her name was Useless, but he knew without a doubt she had no name.

Born into this life. Given to Romeo Giavanni, his father.

This girl, no, woman now, had no idea what life was like outside the boundaries of her prison. Life with his father was a prison.

No money. No identity. Nothing.

Raphael had been surprised when his father didn’t sell her. In their world, slave girls were kept for only a couple of purposes: sex and work.

She wasn’t an ugly girl. He knew she was a virgin, untested. For a long time, she’d been in his father’s employ but he’d yet to actually see his father abuse this girl.

Sometimes, when she was out in the garden, being ordered into the cold to help the gardener, he’d catch her with a glimpse of a smile on her lips. It was so rare to see a smile in their world, but he’d caught it and found her completely beautiful.

Now, he paced outside the room as the doctor he knew and trusted attended to her wounds. One in the leg, another in the shoulder.

What he’d done had been a mistake.

Would his father notice her gone?

Running a hand down his face, he waited as Timothy did what he did best. No one could rush him.

After going over to his drinks table, he uncapped the whiskey and poured himself a generous shot. There was no reason for him to have a fancy decanter. All he needed was the bottle and a glass to drink out of.

He waited. The time ticked by. No one came to his house to retrieve her.

His father had a lot of slaves, a lot of men. Surely, he wouldn’t miss this one. There was no coming back from this fuck-up though. He knew that.

As he finished off the shot of whiskey and poured his third, the door opened and out stepped Timothy, looking as pristine as when he walked in.

“I wouldn’t advise alcohol at a time like this.”

“She’s stable. I gave her enough sedative to knock her out. She’s passed out on the table for now. You might want to move her to a bed in case she moves.”

Raphael nodded. “Do I need to be concerned with your word of honor on this?”

“I’ve told you once and I’ll tell you again, I only wish to have one payment. My loyalties do not lie with your father. They never have. He’s wanted my services but I don’t hand them out to just anyone. He’s been content with second-rate doctors and medical care. When can I expect my payment?”

Timothy wasn’t just any doctor. He was a damn good one with an impeccable healing record, and all of his patients adored him. Timothy, though, had a certain need for death and destruction which came in the form of hurting those who really didn’t need to be saved. Rapists, murderers, or Timothy’s personal favorite, child molesters. He liked to take his time with them. It wasn’t always so hard to find them for him.

Once Timothy did something for him, Raphael found the perfect candidate and delivered them to him at a secure location. From there, Timothy did what he liked. They had discussed it and Raphael had even asked to see what he did. Never again. He’d seen a lot of torture in his world. Being a friend of Antonio, who happened to be the Giavanni torturer, was enough. Timothy was a monster in disguise. Only, he really didn’t have any desire to hurt just anyone. He’d gladly wait, months, if not years, to play. His words.

“Excellent. If there are any concerns about her wounds, please do not hesitate to call me. As usual, until she is healed, I consider this one client for a prize, understood?”

“Good. As always, a pleasure doing business with you.”

“My father cannot know about this.”

“I saw the brand on her, Raphael. What you’re doing is dangerous.”

He finished his fourth shot of whiskey. “Tell me, Timothy, what would you do with a man like my father?”

“Oh, Giavanni would need some special kind of care. His brand of monster could only come with the highest form of punishment.”

Raphael knew his father was a monster. He peddled in women and girls to the highest bidder. It was a division of their business not many people knew about. He doubted even Antonio knew about the trafficking. If he did, he made no mention of it. It wasn’t like his father had been doing it for long, only the past couple of years.