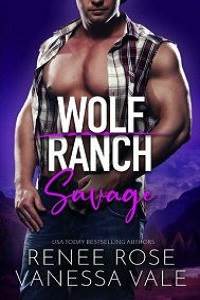 Cooper Valley’s lone saloon, Cody’s, was packed with a mix of drunken humans and shifters. The twang of country music filled the air along with whoops and hollers from the back corner where people tested their mettle on the mechanical bull. The scent of spilled beer and potent cologne made me wish for wide open spaces. I tossed back another whiskey and watched the blonde nurse weave across the floor for her turn. Tipsy humans weren’t usually my thing, but this one was damn cute. Her lush mouth was wide open in a carefree smile, her cowgirl hat askew on her head. She wore a pair of hot pink, cowgirl boots with her short jean skirt that combined to make her the hottest number in the bar. I was jealous of the mechanical bull. If she wanted to go for a ride, she’d get more fun out of my dick. I could promise her that.

Of course, my pack brother, Boyd, would strongly disagree with my desire to sidetrack the nurse from his mate’s bachelorette party. The shindig we males crashed.

Boyd and Colton had ridden in a limo with their mates and the other ladies in the group. I’d caught up to them because leaving human females unprotected at a drinking establishment was not a possibility. Boyd and Colton were keeping an eye on their mates, but as council enforcer, it was my secret job to keep everyone safe at all times. Audrey now belonged to the pack, and the way Colton was keeping a protective watch on her sister, growling at any male who came near her, I had a feeling she’d be mated as soon as they found an available horizontal surface.

I accepted another shot and raised my glass to Boyd, who stood a few feet away, protecting his mate. His pregnant mate.

Again, lucky bastard. How the cocky fuck found a human to be his mate, claim her and put a baby in her belly was beyond me. He hadn’t been around in years. Returned home for one rodeo event, and he’d been lassoed by a cute Ob/Gyn.

And me? I’d been downing the liquor like it was water, trying to tamp down my wolf’s agitation that I hadn’t found my own mate yet. I was older than Boyd and Colton and had had plenty of opportunity, not only in Cooper Valley but also as I traveled as an enforcer. I had more reach than most shifter males to find a mate.

Now, looking at the Wolf brothers zeroed in on human females, it occurred to me that maybe I’d been looking in the wrong places.

I hadn’t realized a wolf could choose a human for a mate, but clearly they had. It made no sense to me logically, but there was no denying biology. Boyd was certain. Colton looked pretty damn certain too.

I glanced away from the Wolf boys and caught a glimpse of Becky on the bull. Yeah, the hot little number with a jean skirt riding high on her thighs made my dick press painfully against the zipper of my jeans. A human male—damn, actually three human males—lurched toward Becky, the adorable tipsy nurse, as she hopped off the mechanical bull. My wolf growled.

I didn’t like males taking advantage of a female who’d been drinking. She might not be my female to specifically protect, but she was here with our group, and I’d be damned if I was going to let any male paw her when she was in this inebriated state. Hell, even if she was stone cold sober.

I downed the two fingers of whiskey and pushed off from the bar, picking my way through the crowd with my gaze glued to the petite blonde.

“—why don’t you take a ride on me next?” some asshole said to her.

“Why don’t you let me through?” she countered, arching a brow.

Good. She wasn’t as drunk as I’d thought. I liked knowing she could take care of herself. Still, I felt obliged to provide back up. It was in my wolf DNA and in my enforcer job description.

“You heard the lady.” My deep voice cut through the crowd, and four heads swiveled my way in surprise—the three human men vying for Becky’s attention and the lovely nurse’s. I didn’t get in her space, wanting to give her the room the other guys weren’t offering.

She beamed at me from her spot by the rail that enclosed the mechanical bull area. Her blue eyes showed pleasure at seeing me, and I wondered what they’d look like when they showed pleasure from me getting her off. I didn’t care if it was on my fingers, on my mouth or on my dick. I’d satisfy her any way she wanted it.

It took me a second to recover from surprise that she knew my name, and in that moment, the asshole in question positioned himself between me and my little nurse. Yeah, my little nurse because I had my sights set on her. But these assholes were pretty much cockblocking me, which really didn’t set well. The fact that they were messing with Becky didn’t make me happy either.