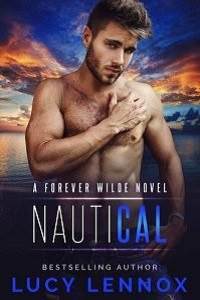 My brother King had tried to warn me about this. Well, not this specifically. Even King wouldn’t have anticipated me being shoved buck naked into a closet on a superyacht in the Caribbean.

“If you never listen to another word I ever say,” he’d said, “at least remember this: never trust a rich older man trying to get into your pants. They’re manipulators and users.”

If only he could see me now.

I looked down at myself with a sigh. At least there was a tiny sliver of light coming in under the closet door to illuminate my surroundings. The master closet was full of clothes, but none of them looked like they’d fit the showy style of the man who’d brought me here. Prescott Resnick was a pompous ass who’d probably popped his Izod collars when he was growing up in the 1980s. When I’d first seen him at the club in St. Mitz, he’d been wearing a yellow linen shirt unbuttoned about six spaces too many. I couldn’t blame him, really. The man had a nice body. If I had a body like that when I hit forty, I’d probably want to show it off too.

It had been the bartender’s whispered words in my ear that had finally lured me past the warning bells clanging in my head about the man.

“Says he owns the Worthington, and I heard she’s looking for a new chief mate.”

Suddenly, the preppy linen-clad peacock had been the possible ticket to a new job and an extension of my time in the Caribbean. If I could find an excuse to stay here a little longer, I wouldn’t have to return to Hobie and deal with facing my future now that all of my original plans had gone to shit.

We’d spent the rest of the night dancing, drinking, and eye-fucking. When he’d finally brought me back to the yacht, my heart had tripped in my chest. The Worthington was stunning. She was eighty-eight feet of pure perfection, custom-crafted by an English company called Sunseeker and probably worth at least fifteen million dollars. I’d already scoped her out after finishing up my last gig captaining a small catamaran for a family’s vacation. With the busy season ending, I’d been released from my job at the charter company and had been planning on flying home to Texas.

But the opportunity to stay a little longer as chief mate of the largest private yacht in port? Too good to pass up.

I wasn’t proud of myself for giving him a little more credit because of his yacht, but I also wasn’t going to forgo a night of hot sex with a fit older man in thousand-thread-count sheets when the alternative was the St. Mitz youth hostel with shared rooms and bonus cockroaches.

And the sex had been plenty hot. The man sucked dick like a champ, and if he’d slipped into referring to himself in the third person a bit there at the end, well, so be it. It wasn’t like I was marrying the guy. More like I needed him to consider hiring me or at least introduce me to his captain.

Before I’d had a chance to inquire about the position, however, we’d been awoken by happy chatter just outside the stateroom windows. Prescott had shot out of bed like a missile.

“It’s worth what?” I’d mumbled, unsure of where I was and who he was. I’d rubbed my eyes and looked around at the lushly appointed room. Ah, the Worthington. I remember now.

“Cal, get in the fucking closet. I’ll distract them and you’ll sneak off once we’re clear, okay? Now go.”

He’d scrambled to put his clothes on while I remembered mine were still on the top deck by the hot tub. Crap.

“Why am I going into the closet? And who’s on board without your permission?” He’d spent way too much time last night lamenting how hard it was to keep hangers-on away from his precious ship since it was such a standout in every marina it docked. It had gotten to the point I’d started to feel a little guilty about being one of the people he’d been complaining about, but then I’d quickly distracted him by stripping down and luring him into the hot tub on the top deck.

The voices had come closer, and this time they’d seemed like they were right outside the bedroom door.

Prescott had looked at me with panic in his eyes. “Ah… work, um, people. Clients! And they can’t know I have a… a…”

The handle on the stateroom door had jiggled, causing Pres to shove me hard into the closet and slam the door closed after me.

“Cheap fuck?” I muttered, feeling like gutter trash. I heard the snick of the stateroom door, and then Prescott’s voice was loud and commanding.