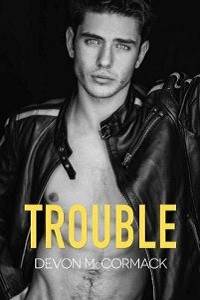 “Oh, come the fuck on,” I muttered as rain slammed against my windshield.

Those two things were frustrating enough in and of themselves without the added stress of inclement weather. Considering it’d been thunderstorming the night before, I should’ve checked the weather app on my phone before heading out, but in my rush to arrive early to get settled in and ready for classes, I’d clearly made a terrible mistake.

I’d waited for nearly ten minutes in my spot in the faculty lot before it had started to let up about as much as I assumed it would, so I fetched my laptop case and papers from the passenger seat.

The extension of the faculty lot I’d parked in was closer to the student lot, a bit of a hike from the building. Over the past few years, the school had enjoyed a major growth spurt as parents migrated to Whispersaw County to enjoy the luxury of lower taxes and reasonable real-estate prices, which meant the lot originally intended for teachers was reserved for staff with some seniority.

With my paperwork beneath my laptop case, I should have been able to make it inside relatively unscathed, but the rain began coming down harder, as if fate was eager to show me she had other plans.

Be nice to have an umbrella right about now.

There was likely one in an unpacked box—one of the many stacked up in my new living room. I needed to get it out and put it in the car when I had a chance. But it was too late for regrets, and I’d already had too many of those over the course of the summer. As Mother Nature pummeled my back with water like I was on a theme-park ride, I glanced down to see how much was collecting on the front of my shirt.

Wasn’t too bad. I’d be fine once I had time to dry off.

But as soon as I looked back up, I realized my folly as my foot wedged into something—perhaps a hole in the asphalt—and I went tumbling forward. Given that I was only five foot eight, I was anticipating a short fall, but in my effort to brace myself with my elbow, the experience shifted into a roll, and then another, before a rush of water covered my back.

“Shit.” The universe couldn’t have conspired against me more perfectly if it’d tried.

I started to my feet, noticing my paperwork floating in disarray atop the puddle I lay in. Fortunately, I still had my laptop case in my hand, above water. At least that was something. My clothes were soaked, though, something I’d have to navigate once I got myself out of this mess.

I rolled out of the puddle, crawling on my knees as I collected the papers I’d lost in my fall. As I reached for one, a hand slipped into view, grabbing it for me.

A man in a black poncho, across the puddle from me, picked up a few more. My fucking guardian angel, it seemed.

I gathered the papers with him until we managed to get them all.

“Thank you so much,” I said as I took the papers from him.

“You can thank me in a minute. Let’s get out of this.” He put his hand on my back, and we headed the opposite direction I’d been moving in. He led me to an entrance I hadn’t even been aware of, and I felt a visceral relief. The sound of the rain dulled as the door sealed shut behind us.

He pulled back the hood of his poncho. Clearly, he’d been far more prepared for this rainstorm.

His gaze pulled mine into a set of wide, bright blue eyes, the sort that seemed to peer right into my soul. With a pronounced jawline and cheekbones, he had the kind of face I would have expected to see on a men’s magazine, not teaching in a town like Wyachet. Even his dark, nearly black locks of hair had me wondering if it was intentionally styled to look somewhat messy or if he was just that goddamn pretty.

Those bright eyes studied me for a moment, like he was trying to figure something out about me. “You must be new,” he said, his words passing through full, pouty lips. He had this effortless confidence about him, which was amplified by how totally out of my element I felt.

“Yeah, we can do the introductions in a minute. We need to take care of this first.” He pointed to my shirt, which was now see-through, my nipples on full display.

“Fuck. Unless you’ve got a blow-dryer, I think I’m screwed.”

“Come on, Big Man,” he said, which I found funny, since he was clearly six foot something.

“Thank you again for your help back there,” I told him as he led me down the hall.