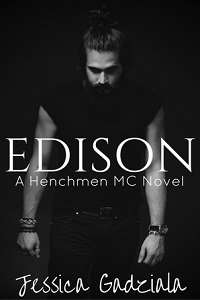 I am going to kill a man.

No, if you were wondering, some idiot didn't cheat on me or cut me off in traffic. I'd have to care enough about you to be upset about you cheating on me; I won't. And I have a horn, a middle finger, and a mouth like a sailor to deal with a driver even more aggressive than myself.

I wish it were that simple. I wish I could say my anger burned hot and bright and fizzled out just as fast.

But this anger was different.

This was the kind that seeped in deep, through each layer of skin, into the wet, sticky insides of the organs, deeper still, until it infected the very marrow of my bones.

This was cold, calculated, and was never going to go away.

Not even after that son of a bitch took his last gasping, painful breath. Not even when he was in a casket. Not even years down the road when he is nothing but hair, fingernails, and bones.

Not even fucking then.

This would never go away.

It had become a part of me.

I would go to my own grave still filled with it. And if there were an afterlife, I would spend it in purgatory. Unfinished business forever. Endless lifetimes with nothing but my rage to keep me company.

I was okay with that.

I would happily risk my chance at some paradise I wasn't even sure I believed in because I was unwilling to let it go, because I refused to repent. There was nothing to repent for. I wasn't going to feel the least bit sorry.

He was going to die at my hands.

I was going to remove his sorry ass from the surface of the planet he didn't deserve to exist on, drinking precious water, breathing the dirty air, speaking to people who had no idea of his evil.

Yeah, not once shred of remorse on my part.

"Lenny, stop picturing me naked, and get to stocking the fucking smokes already."

That was my boss, Meryl.

He hired me because, on paper, I sound like a man. Not that he was disappointed, of course. They might be barely-there, but tits were tits, Meryl was a dude, and he was happy to have a set of them around his sausage fest of a business.

I would never picture Meryl naked. In fact, I very much doubted many women would want to take the task on. He was a decent enough guy - especially given the people he was always surrounded by - but no amount of good nature could make up for the fact that his beer belly spilled out over his waistband and belt - and, let's be real here, his dick - his weak jaw, nonexistent chin, heinous mustache, and the comb-over that wasn't fooling anyone.

I pulled upright, stretching out my back from leaning over the counter for the past who-knew how long. "Caught me. Can't get the dirty thoughts of you out of my head. Wanna fuck me against the ice machine, and get this insufferable attraction over with already?" I asked, deadpan.

My lips twitched when his face went beet-red embarrassed. And maybe a little guilty. He probably had pictured that very scenario. Among countless others. Face-down, ass-up over the front counter. On my knees in the storage room. Pressed up against the front window to show all his buddies what he pulled.

But because of the aforementioned not-so-hotness, it was clear that Meryl was not used to women flirting with him. Even if it was fake. I'd been working for him for two years. I pulled a line like that at least once a week. Every single time, he went red.

"Should fire your ungrateful ass," he mumbled, as he often did. "Up in here with all the charm of a feral cat."

He threatened to fire me twice as much as I fucked with him. After two years, it was clear his comments were as empty as mine.

Maybe he felt bad for me, though I could get another job. Maybe he thought that with my stellar personality and superior work ethic, that I would never find someone else to tolerate me. Maybe he enjoyed my dirty insinuations since there was no way anyone else was feeding him any unless he paid them to. Or, well, maybe, just possibly, he liked me. It was a bit of a stretch. I knew I wasn't overly likable. I gave the customers shit. I drifted off during my shifts probably more than I was present. Hell, I had been known to break out some nail polish and refuse to reach in the case for smokes until my nails dried. I wasn't anyone's dream employee. But I never missed a day, except for three when I had an emergency. I was always on time. I wasn't a maternity leave risk since I had drunkenly admitted once that I had a piece of copper inside me cutting off the baby-maker factory for at least the next ten years.