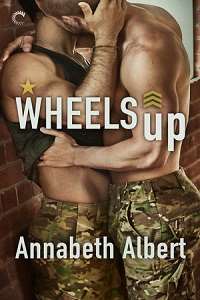 Dustin stared at his phone like it might suddenly turn into a live grenade. Which, en route from San Diego to Baltimore on a commercial airline flight, would be a very bad thing indeed.

Meet. As in a real, live, in-person meeting with the guy he’d been talking to for months on Joe4Joe. And sure, plenty of guys used the military-themed hookup app to do just that, adding “DTF” to their profiles and going straight for easy local meat that was “down to fuck,” not wanting to waste time on cyber. But that wasn’t Dustin.

His phone vibrated again with a new message. You there? This doesn’t have to be a big thing. If you’re going to be in the DC area, we might as well go for the live-action version of our usual, don’t you think?

Heat arced up Dustin’s spine at the mention of live action. Jesus. Just the idea had him squirming in the tight seat. This had all started because Dustin was traveling to DC—Annapolis to be more precise, which he wasn’t sharing with the guy he still knew mainly as Saucer-Man—when Saucer-Man had messaged him, looking to see if Dustin would be around that night for chatting. And Dustin had been truthful, in the same vague sense he always was with Saucer-Man, telling him he was on a plane headed for the DC area for the weekend.

What he didn’t mention was that he was headed to the Naval Academy for two alumni functions—dinner that night and then a ceremony in the morning. But he was bored as heck with the long flight, so he’d paid for the Wi-Fi upgrade and figured he might as well use it by talking to his favorite chat buddy. It was a bit of novelty, flying commercial anyway, but he’d wanted to be sure that he’d be in Annapolis on time, something that wasn’t always guaranteed when trying to catch military flights. However, he’d forgotten how his big frame did not fit in coach. He’d been excited to see that Saucer-Man was online, pulse thrumming like it always did when he saw the little light next to his name in Dustin’s contact list on messenger.

Not free until tomorrow night, he hedged on a reply, not wanting to completely shut down his friend. He’d known that Saucer-Man was on the East Coast, but hadn’t quite realized he was driving distance to DC until he’d proposed this absurd idea of meeting.

That’s fine, the reply came quickly. It’ll take me a bit to drive up anyway. I just happen to be off this weekend, and it seems a shame to waste it.

Dustin wasn’t sure exactly what Saucer-Man did—something involving security. He sounded like an MP, and judging from his Southern accent when they did video chat, Dustin had always pictured him stationed farther south.

This is crazy, Dustin typed back. We don’t really know each other.

That wasn’t strictly true of course—they had six months of conversing under their belts, and he knew plenty about the guy, knew that he liked cold pizza, that he had a crush on Dierks Bentley, that he worried about his family, and that he liked the same terrible 1950s sci-fi as Dustin. Oh and Dustin knew what he sounded like when he came. All sorts of details, both intimate and mundane.

The guy’s reply took a few moments, long enough for Dustin’s neck to start sweating. He wasn’t sure what he wanted the response to be. Finally his phone buzzed. So we’ll play it cool. Safe. I can meet you at the Smithsonian or someplace public. There’s a new narwhal exhibit I’ve been wanting to check out at the natural history museum.

See, Dustin did know this guy, because that was absolutely plausible—in addition to fifties sci-fi, he loved nature documentaries and shows, especially ones about weird creatures. They’d watched more than one shark show together while chatting. Still though, it was tough to shake the feeling that he might be being played. How will I recognize you? he asked.

That wasn’t the same as the outright refusal Dustin should be making, but he couldn’t help his curiosity. He could recite poetry about the other guy’s dick and lean, wiry body, but he’d only ever seen his face in deep shadows, usually hidden by a hat pulled down or a pillow. And hell, this entire endeavor was all about Dustin’s curiosity, and Saucer-Man knew it.

The reply came slower this time and had the little spinning symbol for a file uploading. Here. Probably past time I showed you my ugly mug. Don’t share in any of the forums, okay? Look for me around four-ish?

Holy fuck. It was a picture. And not a dick pic or selfie of his abs, but a plain old normal safe-for-work shot of a guy in a white T-shirt, not smiling with broody eyes and dark, almost black hair. Dustin’s first thought was how the guy was younger than he’d expected—not painfully young like a new recruit, but still younger than Dustin’s thirty-two, probably in his midtwenties. His second thought was how fucking cute the guy was. Just his type with the soulful eyes and slim-but-strong shoulders and hint of scruff along his jaw.