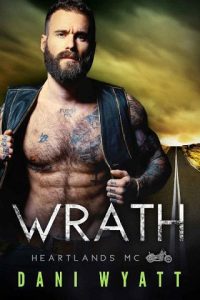 There’s a pounding on the door of the bathroom and I nearly pull my fucking dick off.

“Are you jerking off in there again? You know, the bible says you’ll go blind.” Troy’s booming voice comes through the thick wooden door and I hear some other crew cackling like a group of old women in a sewing circle in the background.

“Just go across the fucking street, march into the fucking church, throw her over your fucking shoulder and give her father the fucking finger. Then fuck her off into the sunset.” His voice is thick with sarcasm and a barely disguised chuckle as he gives the door another few shaking pounds with his fist and I curse under my breath.

I shove my still hard cock into my jeans and try to zip them up without catching my balls. Then I turn and grip the cool, chipped white porcelain sink that hangs on a wall covered with names and numbers, dates and expressions of events here at the club bar where I hold Sunday morning service most weeks, depending on what was going on the night before.

I’m the club chaplain, which is a bit ironic since my tats would tend to say otherwise. The upside down 666 just below my navel came to be ten years ago, just before I kicked my habit. I got it as a reminder of the hell it is to be a bitch to smack and speedballs.

Troy, our now club president, helped me clean up. Him and a few other guys took me to a cabin and locked me down for two weeks. I screamed and fought and sweated and puked and prayed to die until all I could do was lay on the ratty mattress and let my body try to acclimate and my mind rearrange that my life was no longer under my control and it fucking needed to be.

I don’t remember, but seems during my delusions the club guys that watched over me in shifts heard me preaching and quoting bible shit that they said actually made sense. I’d never read the fucking bible before, so it was all sort of spooky. We’re outlaws but we have a moral code. Don’t fuck with us and generally we won’t fuck with you. All I could think was, God was calling me to make that moral code official, give it some structure, and I do believe that no man is above God.

So, not long after I cleaned up, Troy our club President came to me and said the club could use a chaplain. Nothing heavy, but if even two guys wanted to gather in the name of God it becomes our own sort of church.

I didn’t make much of it at the time, but I said sure and over the years I’ve grown into my role, such as it is. Some Sundays, I’m running on zero sleep and even though I cleaned up from the drugs, I still drink.

Yeah, I’m a sinner but the booze doesn’t seem to take ahold of me the way the other shit did, so fuck me, I’m still going to do what I’m going to do and I don’t care what anyone thinks. That goes for drink and it goes for club business.

I served five years hard for manslaughter when I was nineteen and thank fuck the club has a kick ass lawyer because the charge was murder two and he got it reduced to manslaughter with a minimum sentence, then I got out early thanks to overcrowding and a few payoffs. Killing is sometimes a necessary evil. Another irony, because there’s a whole shit ton of ‘killing is bad’ in the bible, but there’s also a hella lot of revenge as well. My violence is always just under the surface. The crew takes me when they know it’s going to be time to rock on someone’s head because I may have a calm exterior, but I’m a motherfucker when the time is right.

You hurt one of mine? You hurt a kid, an animal or someone who otherwise can’t fight back? I’m coming for you and I don’t care what the judge says.

“Hey,” Hammer says as I exit the bathroom. “You have your own private worship service in there?”

More laughter from the group of about six that came this morning to listen to my little service on giving back and revenge. I didn’t say my services would fit into most churches, I know, but they fit us and that’s what matters.

“Yeah, I did.” I bark back, running my hand down my beard and feeling the ache in my cock which seems to never quite go away.

There’s broken bottles on the floor of the bar, and most of the tables are either upended or shoved out of place because we had a couple Outlaws thought it would be funny to come in for a drink about two in the morning.