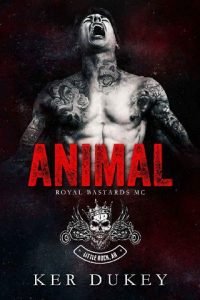 My father always said to find a bitch who keeps your mind calm, belly full, and balls empty. Save your love for the road. If you give it to a woman, she’ll use it to control you, even after she’s left you.

The thing is, I didn’t give my love to a woman; I gave it to a girl who happened to turn into a woman, and this is our story…

“She will kick your ass,” I warn Mason, who’s picking up a toad, hoping to put it down Drew’s shirt. I’ve known Drew since she was six years old. I was on the cusp of turning eight and she caught my attention when a kid at a family cookout tried teasing her about her pigtails. She took a pair of scissors and cut them off, putting them in his lap, like a badass. From that day on she’s been my best friend.

Not two seconds later, a scream rings out, and Mason is lying on the ground, cradling his junk. “Told ya,” I snort, kicking off my sneakers and wading into the dirty water of the pond Mason’s old man calls a pool.

“You bitch,” Mason wheezes, trying to get his breath back.

“A bitch who kicked your ass.” Drew smirks, sauntering to where my sneakers lay on the grass. “Did you know he was going to do that?”

“I knew you were going to drop him,” I tell her honestly, grinning.

“My daddy said I shouldn’t be hanging out here. I got sick last time we played in this pool.” She scrunches up her nose, her freckles more noticeable in the summer sun.

“What’s wrong with the pool?” I hold out my hand, gesturing to the murky water swimming with wildlife. I don’t think they use the proper stuff to keep it clean like the pools at hotels.

“You think this is clean?” She places a hand on her hip, her mop of curls whipping around in the wind. It’s grown longer than usual.

“Clean enough.” I shrug. Since when has she cared about getting mucky?

She picks up my sneakers. “Clean enough for these?”

“Put them down, Drew,” I warn, and she teases by dangling them near the edge of the water. Before she can do anything with them, she’s shoved hard from behind and hurtles toward the pool face first. “Boom, bitch!” Mason hoots, hands in the air like he just won a wrestling match. Her body splashes against the water, but it’s too shallow, she was too close to the steps. She floats there, facedown, motionless. My stomach twists.

Racing to her, I pull her against me, turning her body and swiping her hair from her face. A ghastly crimson slit traveling from her hairline to the top of her eyebrow seeps blood. “Shit,” Mason calls out, running his hand through his hair.

“Go get your dad,” I bellow, dragging her out of the water and grabbing a towel holding it against her cut. “Drew, don’t do this to me. You’re my best friend, wake up.” I don’t know what to do. Panic blurs my eyes.

“Is she dead?” Mason asks, coming back outside.

“What the fuck did you do, you little asshole?” Mason’s dad roars, coming out through the back of the house, buckling his belt, a cigarette hanging out of his mouth, wearing his cut with no shirt.

“Let me get a look, kid,” he tells me, removing the towel to look at the wound. He stinks of motor grease and ash. “Fuck, that’s going to leave a nasty fucking scar, and she’ll have a shiner for a couple weeks, but she’ll live.” He pats my shoulder and places my hand holding the towel back to her head.

Getting to his feet, he pulls out his phone and calls her dad. “Mitch, your girl’s banged up. Cut her head in the pool. Yeah, meet me there.” He ends the call, scoops Drew up, and puts her in the back of his dirty truck, gesturing for us to get in with her. I place her head on my lap and keep the towel against her wound, the gray fabric nearly completely red with her blood.

Ten minute trip to the hospital and she still hasn’t woken up. My gut hurts.

We’re sitting in the waiting room when her old man comes barreling through the doors like a bull in a china shop, nearly shattering the glass windows. “Where’s my baby girl?” he demands to any and everyone. Mason’s dad steps up, pulling him to the side and gesturing to her room. I stand, then sit, stand, pace, waiting. Two seconds later, my old man comes through the doors, looking pissed as all hell.