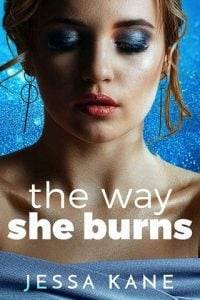 You’re doing the right thing. The only thing.

That’s what I keep telling myself as I climb the slick grass hill toward Rosewood Mansion, thunder booming behind me like a stern warning. Rain has saturated the ground and the grooves are worn out on the bottom of my shoes, so I keep almost slipping. The fact that I’m carrying a sleeping toddler in my arms is not helping my balance whatsoever, but I can’t wake him. I can’t. If he pins me with those hazel eyes so similar to my own, I won’t be able to do what’s necessary.

And leaving my baby brother at the mercy and kindness of one Mr. Sebastian Spears is my final option.

In town, they whisper about Mr. Spears. They call him a bastard. They call him arrogant and evil and malicious and bitter. But I know better. I’ve looked up into those cobalt blue eyes while dangling from the edge of a cliff. When I thought death was certain, he pulled me to safety, rocked me while I cried. I’m eighteen now and the incident happened well over five years ago, but I’m certain he’ll remember me. I’m certain he’ll hear my pleas for help.

While I’m positive Mr. Spears is still a goodhearted man all these years later, a lot about Rosewood has changed since I was an adolescent playing on the dangerous cliffs just behind the house. The ten-foot-high walls that run the perimeter of the mansion are the main difference. They are made of stone. Forbidding. But there must be a good reason Sebastian built them.

Just like there’s a good reason I used a hairpin to pick the padlock.

Curtis stirs in my arms and I slow my walk, using my body to shield him from the rain. I’m not sure how much of the moisture on my cheeks is tears and how much is precipitation. I love my little brother beyond words—he’s all I have left in the world—but try as I might, there is no money left over to feed him. Me, either. We go hungry most nights and I can’t stand to listen to his stomach growl anymore. It shames me. Tortures me.

Mr. Spears is the richest man in the county and beyond. He will care for Curtis until I can get a proper job and a roof over our heads. One that doesn’t leak. One that isn’t adjacent to the rough local pub, the customers knocking on our door at all hours of the night, threatening to break in and have their way with me. Tonight was the final straw. The padlock on the door was beginning to snap and I had to make a fast decision.

Curtis deserves so much better than me. Than this life of scraping by and wearing rags. Begging in the streets when the factory manager neglects to pay me in full.

There is no one else I trust in town to look after my baby brother. My parents are gone, dust in the wind. Their friends have moved on, driven out by the rise of crime. The lack of employment. I have an aunt three towns over, but we haven’t spoken in so long, I’m not even sure she would recognize me. She and my mother were at odds for most of their lives, never close. And anyway, my aunt doesn’t have the money to feed two mouths, even if she wanted to. Her life is a lot like ours. Hand to mouth. Scraping by and making do.

Harding was once a beautiful seaside town, but it has fallen on hard times. Everyone—except for Mr. Spears—is living hand to mouth. I won’t let Curtis starve, though. No. I’ll make this sacrifice and one day, I’ll come back with enough money to support us both. Somewhere beyond the polluted skies of Harding.

Glancing upward, I notice the sky isn’t nearly as dirty this high on the hill. In fact, now that the stone wall isn’t blocking my view, I can almost make out the shape of the stars, the varying grays of the stormy sky. Just ahead, there is an outline of the rambling stone mansion and I increase my pace, wanting to get Curtis out of the rain before he gets sick.

I climb the sweeping front steps a minute later and stop at the front door, shifting side to side, holding my brother tight.

“It’s not goodbye,” I whisper, kissing his warm forehead, making sure the blanket is wrapped around him securely. “It’s just farewell for now. I’ll be back for you. I’ll be back.”

With a sob clogging my throat, I crouch down and position Curtis comfortably. Out of the rain. I slip the note out of my pocket and tuck it into the bundled wool, stepping back slowly, one foot at a time, my heart suffering in my chest.