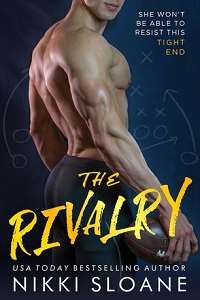 An ocean of scarlet undulated in the sold-out stadium. The Horseshoe was a restless sea of red coats, blankets and hats, covering nearly all of the ninety thousand people in the stands, and the sea would turn violent if Michigan scored a touchdown.

If it were any other game, Stephanie McCarthy wouldn’t be as stressed, but this? This was The Game. She waited all year for the clash of gray helmets against those loathsome blue and yellow ones worn by the convicts up North. Three stinking points wasn’t going to cut it, not when Michigan’s offense was already at midfield. What was her husband’s defense doing?

Breath streamed from beneath facemasks into the cold air as the men came to the line of scrimmage, and once they were set, there was no movement. Michigan quarterback’s voice rang out, and as soon as the center snapped the ball, OSU’s wall of defense was unleashed.

“Get him!” Stephanie screamed over the edge of her red blanket. It was cocooned around her so only her face was visible. “Put his ass on the ground!”

She was thirty rows up in the stands, but when the pocket collapsed and the quarterback was sacked, she’d swear the players could hear her.

The announcer’s voice boomed over the roar of the crowd. “The quarterback is sacked for a loss of eight.”

It didn’t matter if her voice was too loud. By now the people around her were used to it.

“All day long! You hear me, number eleven? You’re gonna sit right there on that grass all—Oh!” Her hand shot out and latched onto the shoulder of the gentleman in front of her, one row down. He startled and turned, casting a glance back.

“You okay?” Concern streaked across his expression.

“Yeah.” She straightened and released him. “Sorry, that one was strong.”

His gaze flitted down over her red cocoon. “You sure you wouldn’t be more comfortable in the box with the other ladies?”

She feigned outrage. “Who the hell told you I was a lady?”

He laughed, but it was nervous, as if he wasn’t sure she was joking. “Johnson’s wife is up there. She’s only five months pregnant.”

His eyebrow lifted. “I don’t think I like football as much as you.”

On the field, the huddle broke. Michigan’s quarterback shook his throwing hand out, as if trying to relieve a stinger.

She snorted, then took in a deep breath to help project her voice. “You suck it, number eleven! You can cry into your helmet after your next sack, you puss—Uh!” This time when she grabbed the guy in front of her, she really dug in her fingers.

“I’m so sorry.” In her haste to grab onto him, she’d let go of one side of the blanket, and the cold rushed in.

His gaze washed over her enormous pregnant belly. She was nine months along, but knew she looked closer to twelve.

“When are you due again?”

His eyes went so wide, it was surprising they didn’t fall out.

She was distracted and missed the snap, but caught the action just in time to see the running back get tackled at the line.

“No gain on the play,” the announcer said, and it was met with a thunderous cheer from the stadium.

“Way to go, number eleven!” she yelled. “We sure didn’t see that coming at—” Words abruptly were too hard to speak. Everything focused in on a point as the powerful contraction seized her.

“Maybe you should ease up.” The guy’s quiet statement pulled her back into the moment.

His look said she was crazy. “Because that’s why you should stop? Not because you’re in active labor?”

The next intense wave of contractions hit and left her with no choice but to sit. She smoothed a hand over her belly, huddled down in her seat while everyone around her was standing. It was secluded, just her and her baby.

“Listen up, Kayla,” she whispered to her belly. “Your father’s down there coaching, and even though we can’t wait to meet you, I don’t want to pull him away from the game. Our defensive line needs him right now. We’ve been waiting all year for this game.” It was impossible to keep the desperation from her voice. “We just need you to wait two more hours.”

The crowd’s collective voice rose, and it was difficult to hear the announcer, but she just made it out.

“Number twenty-three tackled for a loss of two. Fourth down Michigan.”

The contractions seemed to subside faster than a snap count. She felt stronger and like herself again. Somehow, she knew she’d been heard. Already her daughter understood the significance of this game.