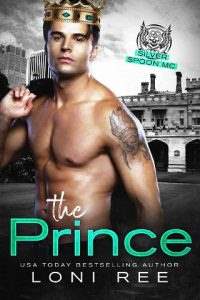 To say I’m p*ssed off when my brother orders me to marry some girl I’ve never even met is an understatement. I’m beyond livid. I colorfully express my views on the matter to my MC brother over breakfast, and the new waitress in town takes offense. And pours a pitcher of ice-cold water in my lap. At that moment, I discover the notorious Silver Spoon Falls water works through denim. The ticked off little waitress steals my heart on the spot then disappears before my blown mind has time to react. That’s okay, I’ll find my curvy little peach and make her mine. Even if it means getting disowned.

The big jerk thinks marrying me is a fate worse than death. My tempter and impulsiveness took control and I demonstrated to the hot-as-Hades prince what I though of him. In public. Oops. My bad. Now, I plan to get out of town before he realizes I’m actually his new fiancé and the dog doo-doo really hits the fan.

The Silver Spoon Falls water has claimed another victim. Sit back and enjoy the show as The Prince attempts to dig himself out of the deep hole his big mouth created.

If you like over-the-top, curvy girl insta-love romance with a bunch of humor, and tiny amount of drama then this Loni Ree Silver Spoon Falls Universe story is perfect for you.

These wealthy Texans have it all—Money, looks, power, their MC and brothers. The only thing missing is someone to share it all with. There’s a shortage of eligible ladies in town but these determined men won’t let that slow them down. These MC brothers are going to turn the town of Silver Spoon Falls, Texas, on its ear looking for their curvy, soulmates.

Nichole Rose and Loni Ree are bringing you the Silver Spoon MC Series and these aren’t your typical MC romance stories. Nichole and Loni like to keep things light. Come along with us on this wild instalove ride.

“It sucks to be you.” Giant, my MC brother stares at me in shock. “I never thought I’d feel sorry for a real-live prince, but, damn, you are so fucked.”

Slamming my coffee cup down on the fifties-style Formica tabletop, I glare at him. “No shit, Sherlock.”

I’m sitting here in the Trust Fund Café, still reeling over this turn of events. I can’t wrap my head around what’s goddamn happening to me. There’s no escaping this unbelievable nightmare. Fuck.

“Explain it to me and we’ll try to come up with a solution.” Seriousness moves across Giant’s face. My MC brother owns his own security firm that contracts with some of the biggest celebrities in the world—including my brother, the King of Belldonnia. I trust Giant to help me with any situation, but I’m pretty sure this one is fucking hopeless.

“It all started with a coup attempt and ended with my brother arranging my wedding. My fucking wedding to a girl I’ve never met,” I growl.

Over the last few months, I’ve been helping my older brother, the newly crowned King of Belldonnia, deal with the recent upheaval in our country caused by our uncle’s attempt to steal the throne. After our father had a massive heart attack six months ago, the doctors urged him to step down. My parents discussed the situation and decided it was time for my father to abdicate the throne to Lorenzo, my older brother, then they bought a small farm in Montana and moved across the ocean.

Sensing a moment of weakness in our family, my Uncle Leon attempted to sidestep my brother and claim the throne for himself, which started a landslide of problems. I’ve been in Belldonnia for the last six months, trying to help Lorenzo put out all the fires.

In the end, the loyal residents of our small European country rejected Uncle Leon’s attempt to steal the throne. Once our uncle’s small band of rebels realized the people wouldn’t betray the royal family, they abandoned their efforts and went into hiding. But it took several months for us to stabilize our country after the coup attempt. Lorenzo sentenced Uncle Leon to exile for his crimes and created a new cabinet to help him post-turmoil. I thought that was the end of my headaches, but another crisis popped up.

Lawrence Delacour, the US Ambassador to Belldonnia, and his wife were killed in a plane crash on their way back from a meeting in New York. Lorenzo felt guilty over the situation since he’d been the one to send the ambassador on the mission. Lorenzo attended the funeral and promised the ambassador’s brother, a huge Hollywood director, that the crown would assume responsibility for the Delacour’s twenty-one-year-old daughter, Camilla.

I had thought the smoke was finally starting to clear so I could return home to Silver Spoon Falls when Lorenzo pulled a fucking fast one on me. My goddamn brother arranged for a marriage between me and the older Delacour girl. Fuck my life. It's been a week since my brother let me in on his plans, and I'm still reeling from the shock.

I returned to Silver Spoon Falls yesterday, hoping my MC brothers could help me decide how to handle this clusterfuck situation. Giant was the only one around last night when I stopped at the clubhouse. I was dead on my feet from the long flight, and we decided to have breakfast and discuss all my problems.

“My fucking brother really screwed me over this time.” I sigh and watch Giant wince. “I’m fucked and not in a pleasurable way.” Sensing someone walk up to the table and stop, I glance up and get the shock of my life.

Angry cornflower blue eyes stare into mine while the goddess lifts a glass pitcher over my lap and pours. “Jerk.”

Ice-cold water drenches me as heat infuses every molecule of my body. Everything around us disappears except for me and the goddess. This beauty is fucking spectacular. She’s mine blasts through my mind as insane emotions bombard me. I ignore the icy water dripping from me and stare up into her furious blue eyes.

Fuck me. She’s the most luscious vision I’ve ever seen. Her beautiful oval face is surrounded by light blonde, nearly white curls while a bright red blush covers her delicate peaches and cream complexion. Visions of twisting my hands in her curly blonde locks while fucking my curvy peach from behind roar through my mind. My cock turns rock hard behind the freezing cold, soaking wet denim as my mind whirls with dirty thoughts. The stunning little peach just stole my heart. Goddamn it. This will throw a monkey wrench in my brother’s plans, but who gives a fuck. Nothing will stop me from claiming my curvy little soulmate.

While I fight the urge to throw her over my shoulder and run out the door, the beauty backs away from the table. She looks horrified, and the urge to comfort her nearly brings me to my knees.