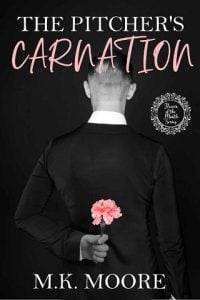 When did I get this old? I wonder as I sit in an ice bath for the third time this week. I am not old at thirty-two, but my body has had enough. I have put it through a lot, and I have no intentions of slowing down anytime soon. I have been playing baseball since I was five years old. I started in T-Ball and made my way to the big leagues. I have been playing for Atlanta for ten years now. It’s home. I grew up in Lawrenceville, so to be able to play for the team I rooted for my whole life has been amazing. My parents are nearby. My little sister is still in college, but she's nearby too. It's nice being a hometown hero, but the national press makes me out to be more than I am. I was dubbed the bad boy of the big leagues fairly early in my career, and it never went away. I don't drink, yet I have had several alleged DUIs. I can't forget about how my steroid addiction is out of control. I've allegedly fathered numerous children. That would damn near impossible, seeing as I've never slept with a woman. My mama would kick my ass from here to Macon if I ever treated a woman like yesterday's boxers.

Early in my professional career, I learned that being that kind of player wouldn't work for me. For some of my teammates, cleat chasers are a way of life, but I avoid them with a ten-foot pole. My job is baseball; luckily, it's my joy too. We are in the off-season right now, and I’ve had to rest my arm more than usual this year. As a pitcher, it’s literally insured for millions of dollars, but my entire body hurts these days. I’m afraid my career is almost over, and I have nothing to fall back on. I went to college, but baseball was my whole life, and I’m not sure what I can do with a liberal arts degree.

“I’ll be on vacation for two weeks,” Jensen Wilson says, forcing me to open my eyes. He’s the team’s physical therapist and my best friend. We met on my first day with the team, which happened to be his second day. He’s been helping me get my arm back in shape for the season opener in March.

“That’s right. Where are you taking your wife again?” I ask. He’s married to the team owner’s daughter, Stella. They got married about six months ago in the middle of the season, so they couldn’t take a honeymoon then. It was a surprisingly simple wedding at an outdoor venue in Trenton, Georgia, near Chattanooga.

“France,” he says, smiling. Not for the first time, I wonder what it must be like to be in love.

“Fun,” I say. I’ve only been out of the country a few times, and I didn’t have a great time.

“Yeah, anyway, my sister is starting with the team as a masseuse in March, but she’ll be on call for PT as she has the training for that as well,” he says, but all I heard is sister.

“Your sister?” I ask, raising an eyebrow. I remember her from the wedding. Tiny little thing. Five-foot nothing, thick, juicy curves, and a riot of curly blonde hair. She was in a light pink dress, and she reminded me of a carnation. She looked like she was built for sin. After staring at her for what felt like hours, I walked over to her. She was a stuck-up little thing that all I could think about was burying my cock nine inches deep and making her beg for my seed. Hell, she’s all I can still think about months later.

“I don’t date baseball players,” she said, looking me up and down with disdain. My cock had never been harder. The instant attraction I felt for her is unlike anything I've ever felt before. Coupled with her bad attitude, I was ready to throw her down and make her mine in front of her entire family. Instead, I decided to play with her a little.

“I don’t recall asking you for a date,” I replied dryly. I remember thinking all kinds of filthy thoughts about the two of us. I would have asked for way more than a date, but her sass got me right away. Five little words, and I was hooked. I had every intention of asking her brother for her number, but her words next floored me.

“I don’t fuck ‘em either. Wouldn’t want to catch something,” she said before flipping her hair and walking away from me. I vividly remember the way it felt when she walked right up to another man and danced with him for the rest of the night. Who the fuck was he? I still wonder about that. Her dirty mouth needed to be taught a lesson, and I’m just the man to teach it, but I didn’t have time just then. I’ve got nothing but time now. Training doesn’t start until February.