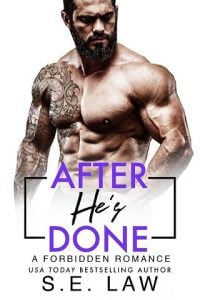 It’s been a while since I’ve taken a woman out on a date because the dates almost always end with both of us feeling depressed, shitty, and more than a little regretful afterwards. Hell, sometimes the women even walk away limping and injured, and I’m not saying that to pump up my ego. Hell, it’s the opposite because I mean it in a bad way. A perforated cervix isn’t sexy, and I’ll admit I’ve been the perpetrator of a handful of those.

But I’m hoping tonight with Sookie will be different. I mean, if a professional gymnast isn’t flexible enough to handle my cock, I doubt I’ll ever find a woman who can take all of me. Sure, Sookie is ripped with shoulders like boulders and thighs made of steel, but I’m desperate now, and beggars can’t be choosers.

After all, I’m huge all over and I mean that especially below the waist. They nicknamed me the “Hulk” way back when, and it’s not just because of my six and a half foot frame. As a freshman in high school, one of my buddies caught a glimpse of me showering after a wrestling match and literally screamed with fright. Yes, little Johnny Prepon lost his shit and ran around telling anyone who would listen I had a “hulk” of a cock. Then, the name stuck and now everyone calls me that.

But right. Back to my date. Sookie smiles at me across the table and I can tell she’s trying to be sexy because she keeps running her tongue along her lips and then biting her bottom lip. It’s not that she’s unattractive exactly. Quite the opposite, in fact. The petite gymnast has long, silky blonde hair, light blue eyes, and a pumped up yet lithe body.

But athletic physiques aren’t really my thing because I like curves. I’m not saying skinny, toned women aren’t beautiful, don’t get me wrong. But I’m a big man and I prefer a woman with soft hills and valleys that I can sink my hands into. Bite into. I like walloping their bottoms with the flat of my hand, and watching as the creamy flesh jiggles and shakes. Unfortunately, Sookie’s got none of that. She’s tight and muscular, and while most guys appreciate a toned bod, I happen to like them busty and curvaceous.

But that’s not important at the moment because again, I’m here on a mission. As a former gymnast, I’m betting that Sookie’s flexible enough to accommodate any position I put her in. Not only that, but I’m hoping that that flexibility extends inside. If this goes well, she’ll be able to take my massive length with only minimal discomfort and we’ll both leave happy at the end. Fuck, I hope so, because I need this.

“You know,” Sookie coos flirtatiously. Her lashes drop as she looks at me with hooded eyes and then she runs the tip of her tongue along her bottom lip so that it glistens. “We could have skipped this whole dinner charade and just started off at your place or mine.” With that, the blonde runs a tantalizing finger over her décolletage, highlighting the shadow between her breasts. Hell, are those breasts even real? I hear a lot of gymnasts get implants because they start taking drugs when they’re young to stunt their growth.

But it’s not just that. Sookie’s been acting over the top the entire date. In fact, at this very moment, I feel her rubbing her foot up and down my leg under the table and I force myself to stay still. I wonder if her shoes are clean because these are nice pants that I just had dry cleaned, and I don’t want to send them to the cleaners again.

But then again, does it really matter? We’re both here for one thing only, and with a sigh, I push back from the table and toss a few hundreds onto the surface. My eyes glance at her uneaten salad and I nod. Clearly, Sookie’s not here for the food, even if the restaurant’s known for their iceberg wedge with bacon bits. Instead, I stand up and hold my hand out to Sookie.

She scrambles to her feet so fast that it’s almost embarrassing. Her blonde hair flies over one shoulder as she looks up at me with worshipful eyes.

“I’m ready, Hulk,” she purrs, slipping her hand into mine. “Anytime you are.”

With that, I lead her out of the restaurant and onto the streets of New York. It’s evening, so the pavement looks grayish pink in the twilight, sparkling with bits of Formica. A balmy breeze hits my face and I breathe deep before wrinkling my nose. Ugh. Unfortunately, NYC has a weird stench in the summer, and the latest rains haven’t washed it off yet.