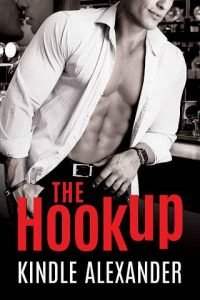 Driving much faster than was safe, Grant Holt yanked the wheel of his truck and pressed the brakes to slow his speed as he almost missed the turn leading into the parking lot of The Hookup Brewpub. He should slow his ass down, but he was in a rush. It had been a long time since he’d been out like this, and excitement bubbled in his belly as he scanned the lot, looking for a place to park. He’d spent a lot of nights in this place. At least in the bar area, and he’d always had a really good time. He smiled to himself as a few of those encounters played through his head. Some of the best.

Grant scanned the lot for the perfect spot. The smile still lingered on his lips as he whipped into the closest space and shifted into park. Man, he liked the way his new truck handled. He checked the distance to the lamppost, hoping the glow of the nearby security light would be enough to deter any would-be thieves and his new baby would remain untouched until he was able to pick it up in the morning. Grant inhaled a deep breath. Maybe he was getting ahead of himself. Hopefully, if history repeated itself, he’d be Ubering home tonight.

Tilting his head, he lifted his gaze to the small rearview mirror and checked his appearance. He pushed a few strands of his unruly auburn hair back in place before taking a good look at his face. His eyes were puffy, probably because he’d been drinking a lot lately. Unemployment would do that to a guy… And just like that, the insecurity was back.

As hard as he tried to fight it, the feelings of inadequacy kept creeping right back into his brain. Shoving the thought away, he took one last look at himself then grabbed the handle and pushed open the truck door.

He’d worn his naval service dress white uniform tonight, which seemed to protest as he reached for his cap. He’d thought his pants had fit a little more snugly over his thighs when he’d pulled them on but hadn’t had time to dwell on the fit in his rush to get to the bar. Surely, they would stretch. Grant sighed, tucking the cap under his arm, and turned toward the front doors of the bar.

Not a lot had changed over the last ten years since he’d been a regular customer here. The smell of steaks cooking on the grill caused his stomach to rumble. The food at this place used to be really good. He might order an appetizer tonight; he wasn’t sure. The only thing he was certain of was that he would be drinking. He sure needed something to calm his nerves.

The soft rustle of leaves from the nearby trees took his mind off his anxious somersaulting stomach. The heat of summer had hopefully come to an end, fall had made an early appearance, making the weather very pleasant, especially for this time of year in Texas. The evening was cool, almost brisk, the welcome nip in the breeze felt wonderful against his skin, ramping up the level of his nervous excitement bubbling inside him.

He pressed the button on the small black key fob until the security system on his new truck chirped, then continued walking toward the door. The melancholy he’d been living under for the past few weeks kept nudging at his consciousness, creeping along behind him like an annoying reminder ready to pounce—these days, insecurity plagued him, lingering right underneath the surface. He needed to take a closer look at that, but not tonight. Tonight, he was here to have fun.

As he reached for the front door, the binding tug at his thighs drew his attention again. Grant looked down as he opened the door, staring at the material stretched across the upper half of his leg. Seriously, had he gained weight? The thought had him bending closer to inspect the uniform pants. Everything fit the same except for in the thighs. Had the material shrunk?

Grant startled back into the world. Shit! He was in the way. His southern manners instinctively kicked in as he opened the door wider to allow the couple standing behind him to enter ahead of him, muttering a quick apology as they passed. Grant followed them inside, sidestepping the host stand and going straight for the large bar in the middle of the open room.

The place was near empty this early in the evening, but that wouldn’t last. The workday was coming to an end and the after-work happy-hour crowd would fill the room—they loved this place. He had too back in the day. A smile ghosted his lips and he shook his head at the sudden rush of memories. There were many. Funny how things seemed the same on the exterior. He couldn’t say the same for himself. Time had changed so much in his life since then.