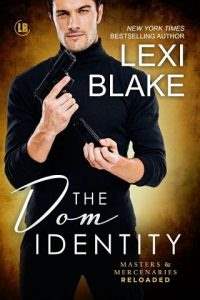 Between the elegant buffet set in the conference room and the sense of hushed anticipation that hung over the office, it was obvious something big was happening this morning.

Michael Malone just wished it wasn’t happening to him. He’d been somewhat excited about the idea of a new assignment when it had first been floated by him, but now he wondered if life wouldn’t be easier if he avoided this particular job.

“He doesn’t even eat carbs,” a deep voice argued. “These babies will be wasted on him.”

“No, he doesn’t. Julian Lodge lives off the blood of his enemies, baby. That’s it. That’s how he stays all lean and predatory. Also, should we be having this meeting in the light of day?” Yep. That was his boss. Ian Taggart.

Michael had been working for McKay-Taggart Security for…had it really been the majority of his adult life? He’d started out—like most MT employees—in the military. The Navy had led to the SEALS and the SEALs to the CIA. The CIA had turned into a clusterfuck of a job, and so he’d landed here and stayed.

He liked his job, enjoyed his team. So why the fuck had he started to think about quitting?

“He’s not a vampire.” Despite the fact that he couldn’t see Charlotte Taggart, he heard the smile in her voice. She always seemed genuinely amused by her husband’s antics. Which was a good thing because there were a lot of them.

“Think about it.” The man most people called Big Tag chuckled. “Have you ever seen him in the light of day?”

“Never even once.” Big Tag continued like his wife had replied in the way he wanted her to. But that was his boss. He plowed through life like a steamroller.

That wasn’t fair. A steamroller flattened things, and the truth of the matter was Big Tag tended to make life better for the people he met. The Taggarts were responsible for most of the good marriages around him. He’d recently been to one of the weddings Charlotte and Ian had a direct hand in.

How the hell had Hutch gotten married before him?

And when had he started to feel like a wallflower at some Regency ball? It wasn’t like he was on the shelf or something. He was a man in the prime of his life, and he wasn’t unattractive. It wasn’t like he hadn’t had some good shots. So why hadn’t they worked out? After a while a guy started to wonder.

He should never have agreed to watch movies with his mother after her surgery. She’d suffered a hard fall while riding around the ranch she and his dad lived on. Shoulder surgery had followed, and he’d taken his turn making sure she wasn’t alone. She’d made him sit through rom coms and a weird amount of Regency romantic drama, and now he was a Jane Austen character worried about his marital prospects.

Michael turned, and Kyle Hawthorne was standing there. Kyle was a reminder that everyone was moving forward, including Michael’s ex-fiancée. She was marrying Kyle’s brother.

“No, he’s still fifteen minutes out.” And now his morning was complete because there she was. Tessa Santiago, soon-to-be Hawthorne. Never to be Malone because he’d been the dumbass who couldn’t love her the way she needed to be loved.

He was starting to wonder if he could love anyone. Maybe his twin had gotten all those genes. It was weird. All of his life he and JT had basically been in the same place, but the last several years had changed all of that. His identical twin had gotten married and now had two kids.

Michael was still drifting through life.

“I don’t get it. It’s like we’re entertaining the president or something.” Kyle glanced into the conference room. “Charlotte threatened unholy hell on anyone who ate the pastries before the client gets here. I saw Li taking Boomer out of the office because he doesn’t think he can stay away from a buffet. Is he a freak of nature or something? How the hell does he eat the way he does and not weigh a thousand pounds?”

“Boomer works out hard, and he’s got a freaky metabolism. And we didn’t do all this for the actual president,” Tessa pointed out. “All he got was some drive-through. But this is Julian Lodge. For Big Tag, he’s way more important than any president.”

“He’s intimidating.” Kyle frowned. “You know how Big Tag explodes at least twice a day? Julian is the guy who never explodes. He’s kept all that rage and hate inside for years, and one day it’s going to come out. You do not want to be standing in front of him then.”

Tessa rolled her eyes. “He’s a sweetheart. I think you’re projecting because you kind of defined yourself there, buddy.”