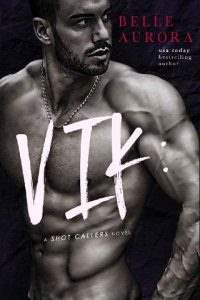 “C’mon. Don’t walk away from me,” his amused holler echoed through the schoolyard.

I held my books tightly to my chest and tried like hell to avoid the human form of halitosis that was following me. And when he grabbed at my arm to stop me, it took everything I had inside me to not throw my books down, then throw down. Because you did not touch a Leokov without permission. Especially if you wanted to breathe through the designated holes you had and not the ones my brothers would put in you.

I bit the inside of my cheek hard enough to draw blood and counted to ten, hoping the anger simmering inside me would calm itself before it boiled over. I tried to be nice. “Mason, there’s nothing to talk about. You asked me out, and I told you that although I was flattered, I’m not allowed to date.” He looked like a wounded kitten in a letterman. “I’m sorry. I can’t go out with you.”

Clean-cut, blonde, blue-eyed, and with a gleaming smile that hid the kind of asshole this guy actually was, Mason pursed his lips and gave me a perfectly pathetic pair of puppy dog eyes. “Give me a chance, Natalia.” Nice. The guy couldn’t even get my name right. “I’m sure when your parents meet me, they’ll change their minds. I’m a good guy.”

I almost said it out loud. Crowed it, actually.

His long eyelashes fluttered in an attempt to look cute but oddly made me nauseous. I gave him one more chance to back down gracefully. “Mason, please. I don’t want any trouble, and if my brothers find out about this, there will be trouble. For you.”

That all-American smile told me he was stupider than he looked. “Babe… I won’t tell if you don’t.”

Ugh. What a douche.

Well, he’d actually done it. He pushed too hard. All I could do at this point was push back. Dropping my “sweet girl” façade, I took a step toward him and uttered, “Do you know who my father is?”

For the first time since he began targeting me, he looked unsure. “Uh….”

Yeah. He knew who my father was. Rumors had circulated about the mob princess. They knew who I was—who we were.

“Do you really want to do this, Mason? Are you ready for this life?” The seriousness in my tone was no joke. “Do you know what a dying man looks like? What a gunshot wound to the head and the mess it makes on carpet looks like?” I wasn’t lying when I revealed, “I do.”

Mason leaned away from me, his pride stopping him from taking the full step back, but his response was quiet. “I just wanted to take you to the movies.”

I blew out a breath, showing him just how stupid he sounded. We both knew what he wanted, and holding my hand in the theater wasn’t it. “No, babe. You wanted to fuck me and report back to your buddies.” He looked stunned by my brash words. “You wanted another notch on your bedpost, and I would make a very nice notch, I agree, but—” I looked him up and down. “—you and I are never going to happen, Mason. Not ever.” My eyes lowered. “And if you keep harassing me, I will have no choice but to tell my brothers about the guy at school who won’t fucking leave me alone.”

I wouldn’t do it, but he didn’t know that.

For a second, Mason looked spooked. He swallowed hard, his voice quieter than usual. “I just wanted to—”

A strong arm came around my shoulders, and my heart did that weird stuttering thing it did whenever I was close enough to smell his cologne. I didn’t take my eyes off the jock, and from the way Mason’s gaze was flittering back and forth between us, I knew the pair of us were a sight, holding our pose, the image of unwitting danger.

Mason’s eyes lowered to Vik’s forearm. XAOC—the bold black Chaos tattoo was out on display, worn proudly but also as a warning to those like my dear friend Mason.

I took pity on the guy. “Yeah. Mason was just leaving.” I blinked prettily. “Goodbye, Mason.”

And off Mason fucked.

We watched him saunter away, and when he was out of sight, I twisted slightly to look at Vik. “What are you doing here?”

“What a fucking dweeb,” he uttered, still looking in the direction Mason went. “Do you like that guy?”

My nose bunched in disgust. “God, no.”

“Good,” he said, taking my books and holding them by his side. His arm slipped down from my shoulders to snake around my waist. “You’d think they’d get the point by now, but they just can’t help themselves. They always want to touch an untouchable.”