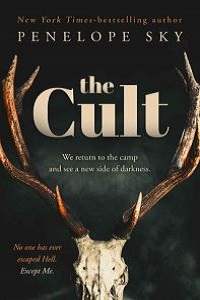 Backstage, I sat in front of my vanity and wiped away the makeup that was pounded into my flesh. My eyes were heavy from the fake eyelashes and mascara. Too tired to take my time, I grabbed the corners of both eyelashes and ripped them off at once.

My ballet slippers came next, carefully unwrapped and removed. My bruised feet were visible underneath, dried and cracked. I dug my fingers into the beaten areas and massaged the aches away.

Ballet came at a price.

I would continue to pay that price until I went broke.

A man’s voice came from behind me, talking to one of the dancers. “Have you seen them?”

I lifted my gaze and looked into my vanity mirror, seeing the conversation taking place behind me. A tall man stood in front of Allison and held up his phone, showing her a picture of someone. His long-sleeved shirt was tight around the muscles of his forearms and the array of muscles of his upper arm. He had short blond hair, cords visible down his neck. With broad shoulders and a narrow waist, he looked strong enough to rip a tree straight out of the ground.

I watched Allison glance at his phone for a moment before she lifted her gaze and looked at him once more. “Sorry, I haven’t.” She tried to step away. “I need to get going—”

He shifted with her. “She’s a dancer here. Are you sure?”

She looked again, but her answer was the same—a shake of her head.

He lowered his phone and turned around, exposing his face to me for the first time.

With bright-blue eyes and a face tight with tension, he looked around the area for the next person to question. His large body was tight with unease, and even though he didn’t look outwardly panicked, there was a sea of trouble behind his eyes. After a scan of the area, he locked his eyes on mine in the reflection of the mirror.

My hands were still on one of my feet, digging into the muscle in the arch of my foot. My fingers paused when he looked at me like that, when hope shone in his eyes, like perhaps I would have the information he wanted.

He came over, his hand still holding up the phone. When he reached me, he put the screen in my face. “Have you seen them?”

My eyes didn’t look at the phone because I continued to look at him, hear his deep voice reverberate in my mind like a chamber with an echo. He didn’t need to fall to his knees and sob to wear his pain on his sleeve. It was audible just in his voice. “Uh…”

He pushed the phone in my face. “Do you recognize the woman? She danced here.” He was all business, desperate for answers.

I looked at the phone and saw a beautiful brunette woman standing with her arm around a young girl who looked to be maybe seven. The woman was gorgeous, a slender figure, nice smile, kind eyes. “Uh…no.”

“Are you sure?” He raised his voice as his blue eyes burned into mine.

I released my foot and rose so we could be level with each other, but he still towered over me, so our eyes were nowhere near each other. I took the phone from him to take a closer look. “What’s her name?”

“Beatrice,” he barked. “She’s gone missing. She had a show here a while ago. I’m trying to figure out if anyone knows anything since the police are fucking worthless.”

I stared at her a little harder. “I’m sorry…your wife must be with another company. We’ve probably crossed each other backstage, but I can’t place her.”

“She’s not my wife.” He took the phone back. “Have you seen the girl?”

I looked at the phone again, seeing a cute little girl with long blond hair. She smiled through large gaps in her teeth, and she had the same eyes that he did. “Is your daughter missing too?”

He dropped his gaze and looked at the phone in his hand, his hostility and desperation quickly gone, replaced by a deep sadness that seemed to shake him to the core. His fingers relaxed on the phone, and he nearly dropped it. “Yes.” He relaxed his arm to his side and didn’t shove the screen in my face anymore. “Her name is Claire.”

It was almost too hard to look at him, to see a father grieve like that, to look weak when he was so fit and strong. His shoulders fell, and he kept his gaze averted, like he was reliving something in his mind. “I’m so sorry. I wish I could help you.”

He lifted his gaze and looked at me again, his expression distant, like he wasn’t really looking at me at all. “Yeah…” He stepped away and went to the next vanity to ask Charlotte the same questions he asked me. His phone was in her face, and he interrogated her like his life depended on finding the truth.