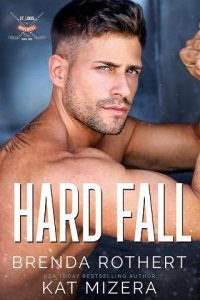 “You’re going to LOVE him,” my best friend, Lauren, gushed. “Seriously, Hadley, Wes is the total package. Hot, smart, funny and he’s a professional hockey player. If Ben wasn’t already the love of my life, I’d go for him.”

I gave her a skeptical look. “You’re always telling me how different the two of them are.”

She waved a hand. “Not in any of the important ways. Stop being difficult. My point is, he’s great, you’re in a major man drought and you’ve got a hotel room all to yourself tonight.”

I suppressed a sigh. Lauren had been my best friend since we met at orientation our freshman year at UCLA. She was the peanut butter to my jelly, and I’d have done anything for her.

Which was why I was pasting on a smile as she ushered me across the crowded lawn of her parents’ Naperville backyard. They were hosting an engagement party for Lauren and Ben, who were getting married in two months. After their three year, extremely long-distance relationship—her in LA and him in Boston—they didn’t want a lengthy engagement. We’d graduated college a couple weeks ago and Lauren was knee-deep in wedding plans.

It was all happening so fast. A few months ago, our biggest worries had been passing our final exams and finding the cheapest prices on our favorite wine and frozen pizza. Now, Lauren was getting married and moving to St. Louis with Ben, where he would be playing pro hockey, and I had just started my new job as a writer for Willow, a lifestyle magazine in New York City.

“Oh! I think I see him!” With a squeal, Lauren grabbed my hand and led me through the clusters of people drinking and eating mini cucumber sandwiches.

My stomach churned nervously. I’d been hearing Lauren talk about Wes Kirby for the entire three years she’d been with Ben. I knew he was hot—I’d seen pictures. And Lauren had assured me he was more than just that.

She was right about the drought. It’d been almost a year since I’d had sex, and seven months since I last went on a date. I wished I could chalk it up to being too busy with finishing school and graduating, but the truth was, I just hadn’t met anyone I liked very much. I was hoping Wes and I would have good chemistry. He was the best man in the wedding, and I was the maid of honor. We’d be seeing a lot of each other that weekend, and also the weekend of the wedding in August.

“Crap, Ben took him to talk to someone,” Lauren said, groaning. “He knows I want to introduce you two.”

“Okay. Just don’t spill food on your shirt.” Lauren gave me a stern look, very familiar with my tendency to spill a little here and there.

I shrugged. “It sure wouldn’t hurt.”

She just sighed and put an arm around my shoulders as we walked over to the food line. “Maybe that can be your first story for the new magazine.” She put a hand out in front of us and waved it in a horizontal line, mimicking a headline. “Essential supplies for the woman who is forever spilling food on her shirt. You could include cute bibs, Tide wipes and bags big enough to hold extra shirts.”

“You’re an asshole,” I muttered, laughing.

“But you love me anyway.”

“I do.” I sighed and met her gaze. “What am I going to do without you, Lo? We’ve been best friends for four years and roommates for the past three years.”

Her light blue eyes widened as she gave me a serious look. “Nothing will keep us from being best friends, Had. Not ever. Even when I’m raising babies and you’re the executive editor of Vogue, we’ll still talk every day and see each other as much as we can.”

Lauren reached the front of the food line and picked up a plate, passing it to me before grabbing one for herself.

“I’m so glad Ben likes cookout food as much as I do,” she said, grinning. “We’re not prime rib and caviar people. Give me a burger and some orange-powdered Kraft mac and cheese any day. I don’t even need the fancy kind with actual cheese.”

I laughed and said, “Remember that time we were studying for finals and we hadn’t eaten all day and we cooked that huge pan of frozen mac and cheese in the oven and we both burned our mouths on it?”

“Oh shit.” She laughed. “That was the worst. I seriously thought I might never regain feeling on that part of my tongue.”

“We binge watched rom-coms the next day with a big bowl of ice between us, just putting new cubes on our tongues after they melted.”