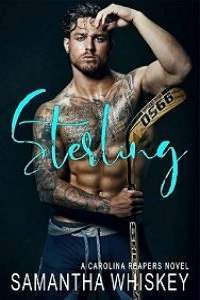 "Good to have you back, Sterling," Paul, one of the jacked security guards at the player entrance to Reaper Arena said as I made my way to the door. It had been a long year, but I was finally home.

"Are you talking about my middle schoolers? Or that group of juvenile pranksters you like to call teammates?" He cocked his head to the side.

"That's them," I said, flashing a grin. With a wave, I disappeared into the arena.

God, I'd missed this place. Not that Bangor hadn't been awesome, but I was a Reaper through and through.

Before that expansion draft, I'd taken it for granted—being a part of a team I loved. Never again. I might not be able to control my future in its entirety, but as of last night, I had a five-year contract to play where I belonged, right here in Charleston, South Carolina.

"So the prodigal son returns," came a voice I knew all too well. Canon, one of the best forwards on the team, pushed off the wall across from the entrance to the locker room.

An uncharacteristic smile broke across the guy's face, and he grabbed me into a quick hug with a less than subtle back slap before quickly releasing me.

I guess marriage could soften even the hardest of hard asses.

"Hey," a guy called out as he stuck his head through the locker room door. "Why the hell didn't I get a hug when I signed?"

The kid couldn't have been older than twenty-two, maybe twenty-three. He still had that slick shine that came standard with most rookie contracts and an undeserved ego.

"Because I don't fucking like you, Olson," Cannon snapped, folding his arms across his chest.

"For the last time, it's Thornton," the kid fired back.

"Still don't give a fuck.” Cannon lifted his eyebrows.

A bigger player pushed Thornton out of the way, his familiar face lighting up as he saw me. "I thought I heard your voice out here!" Briggs pulled me into a hug, half-dressed for the ice. If we weren't careful, the atmosphere would slip into mushy territory. Not that I gave a shit. My heart was full, and my feet were so light I couldn't imagine anything bringing me down today—I was home.

“Signed last night,” I said after the back slaps. “How many Reapers are here?” Gathering before preseason for a few pickup games was one of the things I’d missed in Maine. Hell, I’d missed all my friends here, including Briggs, and I hadn’t even known him as well as the others before I’d been caught up in the expansion draft.

“Enough to have some fun this afternoon,” he answered. “Where’s your gear?”

“In the car.” I motioned behind me. “I have to sign one last thing with Silas, and then I’ll grab it.” There was a part of me that expected this deal to fall through at any moment. “What were you doing out here in the hall, anyway?” I asked Cannon. “Waiting for my smiling face?”

In what could only be fortuitous timing, the elevator doors opened down the hallway, and a tiny, waifish blonde stepped out, her eyes locking onto Cannon with a magnetism the two had always shared.

“Jansen!” She waved, her smile lighting up the space and even bringing one to Cannon’s face. The guy might have been a tatted-up giant, but damn if he wasn’t wrapped around his wife’s little finger.

After yet another hug welcoming me home, and a low growl that told me to keep my hands far, far above her waist, I stepped back, feeling better than ever.

“Are you headed up to Silas’s office?” she asked as Cannon tucked her against his side.

“Good. We just finished a meeting about the foundation, so I know he’s up there waiting. Have you moved back into the village yet? Did you get your old house? Want to come over for dinner this week?” She fired off each question before I had answered the previous one, which only made me smile. Persephone didn’t just run the Reapers’ charitable foundation, she was pretty much charity incarnate, always looking to put people at ease.

Cannon chuckled and pressed a kiss to the top of her head.

“I’m moving back tomorrow if the truck gets here with all my stuff on time, and no,” I finished softly scratching the back of my neck. Another aspect I’d missed about the Reapers was the housing development just outside Charleston that the team owned. Most of the players lived there, contributing to the family atmosphere that I hadn’t found in Maine. “Unfortunately, there were a couple of last-minute trades, and whoever signed his contract right before me got my old house.”