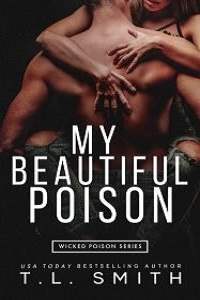 My lip is bleeding. It tastes—I lick it again—sweet. I like the taste. Is that weird? I had heard it’s meant to have a metallic taste. But mine, well, it’s sweet. Maybe it’s the only thing about me that is sweet.

My fingers touch the edges of my lips. The bleeding is slowing, but the throbbing intensifies.

My hand drops away from my busted lip as I glance up at him.

He’s shaking his head, his blond hair barely moving with all the product he uses. “See what you made me do? Fuck!” He swipes his face with his hand and stares at me with emotionless eyes.

How could I have been so blind to those eyes for so long?

“You should leave…” I somehow manage to whisper then lick my lips—I can still taste the sweetness of my blood.

He tries to touch me again, but I step back dramatically.

He shakes his head and scrubs his face again.

Really? How many times does he plan to do that? Doesn’t he know by touching his face he’s spreading germs?

Sidestepping him, I open my bedroom door. “You better leave before I scream.” I blink a few times and then glare. “If you don’t, I’ll kick you where I know the sun doesn’t shine.”

Anger rolls between his brows while his hands tighten into fists. “You need to watch your mouth,” he grates out through gritted teeth, his voice hard and unrelenting.

Anderson takes a step in my direction then leans down so his face is close to mine. “They would never believe you over me. And even if they did, they won’t care. All they want is for you to marry me.” He smirks and steps toward the door. He lifts his hand, and I hold my flinch in as he grips the door handle. “I’ll see you tomorrow, Rylee.”

I watch him step out the door and down my parents’ stairs, saying goodbye to them as he leaves.

What I ever saw in him, I’ll never know.

It’s hard, but I need to get out of this house. My parents expect and want so much from me. Sometimes, I wish I had followed my sister, Rhianna, when she escaped the family business. To be honest, I don’t know why I didn’t leave with her. Perhaps it wasn’t the right time, but now regret chips away at my heart every single day. Every single minute. How do you combat what you want with what is right for you?

With a hard push, I close the door and then slide down its surface. My hands cover my face as I draw my knees up under my chin.

I’ve been dating Anderson since high school. He was the popular football player, and I was the good little rich girl.

Our parents couldn’t be more pleased with our relationship. Fuck, they’re already planning our wedding and I’m only twenty-three.

I don’t want to get married this young, and especially not to him.

Anderson has his good days, but he has far too many bad ones. And let’s be quite serious here, I don’t want any days with him.

I hear footsteps approach my door, and I know who it is straight away.

“Ry, tell me you’re okay?” my little brother whispers, his concern floating to me through the closed door.

“I’m fine, Beckham. I’ll see you in the morning,” I tell him with the strongest voice I can muster.

He’s the only one who understands what Anderson is like, and he hates him for it. But, more importantly, he detests that I won’t leave him, and he can’t grasp the concept of why I stay. It makes him crazy angry, but I can’t seem to muster the energy to do what I know is right.

The pressure from my family is simply too much.

My father takes care of the accounts of some of the wealthiest people in Australia, and that extends to the rest of the world. I’m his only child who’s willing to, or even interested in, taking over the family business. I work with Father now, understanding the basics, as I have finally finished my degree in accounting. And soon, I will run it all. Which makes me happy. I like what I do—numbers and money makes me happy. I like to organize and find the number’s rightful place then fix any problems that arise in handling the accounts.

My sister is what you’d call a free spirit. She’s never done well listening to rules and prefers to travel and live her life the way she wants—carefree and easy-going. My brother is a football star. Even at his young age of sixteen, we all know he’s going places.