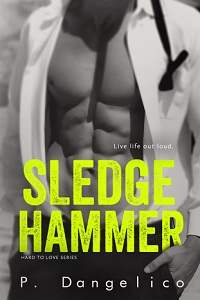 You know how they say never to go to the supermarket when you’re hungry because you’ll make some seriously ill-advised choices if you let your baser instincts rule your intellect? Yeah, the same logic applies to agreeing to see your ex-fiancée when you’ve had a soul-sucking week. I call it a perfect storm of awful circumstances. The State of New York called it arson.

“Deputy Dipshit!” I rake the bottom of a very nice Jimmy Choo high-heeled sandal, purchased on clearance at the Saks On Fifth Outlet, against the bars of the tiny holding cell. Which only serves to remind me that its sole mate was lost somewhere at the scene of the alleged crime. Go ahead and add that to the heap of reasons I wish a stray asteroid would destroy the planet tonight.

“Deputy Dipshit! I’ll have you know I’ve been watching Law and Order since I was ten! I know my rights and I demand my phone call!”

“Ain’t no one gonna come if you keep at it like that,” a deep voice announces.

I look over my shoulder, at my one and only cellmate. Her long body is half hanging off of the metal bench, arm thrown over her eyes, wig askew.

“Sorry to interrupt your beauty sleep, princess, but it’s been ages since anyone’s been back here.”

“Name’s Cassandra. And they always come at the top of the hour.” Cassandra lifts her arm off her face and eyeballs the clock on the gray-green wall. “It’s almost two. Someone will be around soon.”

My inquisitive gaze glides over her expensive clothes and flawless make up. Interesting riddle, this Cassandra. She sits up and crams her feet back into what looks like size fourteen red patent heels. I’m momentarily shocked to discover that Louboutin makes pumps that size.

“Amber.” My eyes cut from her feet to her face. “Nice shoes.”

“Thanks.” While she adjusts the long, straight hair of her wig, her dark doe eyes sweep up and down my person. “Girl, you look like a broken down Cinderella. How’d you wind up in here anyways?”

“Bad company,” I mutter while fiddling with the ripped edge of the vintage Badgely Mishka dress I found in a consignment shop.

Cassandra exhales tiredly. “Let me guess––you stalkin’ yo ex, and show up at his house, and he married with five kids.”

“Not even close,” I reply dejectedly.

“Come on, Cinder. We probably here for another couple of hours. Might as well tell ol’ Cassandra the story.” From what I can tell, ol’ Cassandra doesn’t seem much older than me.

Under her gaze, I feel naked, her sharp eyes performing a thorough examination of my mind and finding every dangerous turn and polluted crevice. “You first.”

“Stalkin’ my ex. I showed up at his house, and he married with five kids.”

“Really?” I can’t keep the doubt out of my voice.

My eyes widen. “So…trespassing, or breaking and entering?”

Cassandra arches a well-groomed brow. “Nothing that exciting. Jaywalking. Also known as walking while fabulous,” she replies with elocution that would’ve made linguistics expert Henry Higgins proud.

“You got arrested for walking?”

“If you must know, I was leaving my boyfriend’s––” Her eyes narrow, lips press tight. “Ex-boyfriend’s house.” The dramatic pause is underscored with a sideways glance. “And on my way to the train station, the friendly neighborhood East Hamptons’ officer came along. We got into it when he decided to write me a ticket for jaywalking. Which turned into public indecency. Which turned into resisting arrest.”

“I burned down my ex’s parents’ house,” I blurt out. That confession felt better than it should.

Cassandra sifts her perfectly manicured fingers through her long hair. “Good for you, Cinder.”

“Not all of it. Just a small part––and it wasn’t on purpose.”

“Right. That’s what I said when my boyfriend’s wife found me on my knees.”

Less than twenty minutes later, Cassandra has given me the Cliff Notes to her life story, how Christopher Hart was reborn Cassandra Hart, and I’m knee deep in my latest tale of woe.

“Who puts drapes in the kitchen?! And how is it my fault that someone spilled an entire bottle of booze on the floor?” Her serene eyes follow me as I wear out the concrete of the holding cell. “He watched them arrest me and said nothing!” Words are flying around as fast and loud as live ammunition.

“Jones? Amber Jones,” a male voice yells. I rush to the edge of the cell and shove my face as close to the bars as I can without actually touching them.

Deputy Dipshit walks up with his eyes glued to the clipboard he’s holding. “Time for your phone call.”

“I can’t wait to tell my lawyer how many different ways my civil rights have been violated this evening.” At my fit of pique, Deputy D looks bored. “And hers,” I say, pointing at Cassandra.