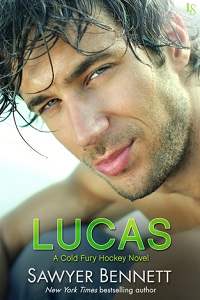 This is not the first charity gala I’ve attended, but it is the first being held underneath a thirty-eight-foot Acrocanthosaurus fossilized skeleton on Valentine’s Day. I have to say, the dinosaur makes this event so much better because of the location and the fact there’s a large stuffed satin heart attached to the skeletal structure right around the area I believe the heart would have been.

We’re at the North Carolina Natural Sciences Museum. I’m here with my Carolina Cold Fury teammate Van Turner, my older brother, Max, and his fiancée, Jules. My crazy brother proposed to her in a magazine article, and she accepted just two days ago. Van is new to the Cold Fury, just as I am. We’ve been here less than two full weeks, both of us brought in to beef up the defense, as the Cold Fury is taking a very focused shot at a repeat Stanley Cup victory.

I want to hoist that cup more than anything in the world, so the answer was a big “fuck yes” when my agent contacted me to see if I was interested. Actually, I think it was more like “fuckity fuck fuck yes,” because Max was the starting goalie for the Cold Fury and we’d never played on the same team before once we went professional.

I’m attending this black-tie gala tonight to help raise money for the museum. It’s not a cause that’s near and dear to me, but I’m here because Brian Brannon, the team’s owner, gave Max four tickets, which cost two hundred dollars each. He couldn’t come because his daughter, Lexi, was in a car accident three days ago and landed in the hospital.

Let me qualify by saying his new daughter, Lexi. Gray Brannon, the league’s only female general manager, announced it at a team meeting. Lexi is a long-lost daughter whom Brian purportedly didn’t know about and she’s recently shown up. More surprising is that she’s dating Roman Sýkora, because he and Gray Brannon don’t get along.

That’s not the only thing causing stress within our locker room. We’ve got the play-offs looming in just a few months, and right now we’re at the top of our conference and want to keep that going in. But we have some key players injured, which is a major stressor, and because Van and I are new to the team we’re trying to fit in to their system.

Add that Gray’s pregnant and due in a few months, and that makes for a moody GM. I wonder if something’s in the water, because our team’s captain, Alex Crossman, is expecting a baby as well in July with his wife, Sutton. Zack Grantham, our second-line left winger, and his wife, Kate, are expecting a baby in August. He’s injured and riding pine, so he’s extra cranky, but he’s supposedly going to be good for the play-offs.

I sip my champagne and glance at Max and Jules. “You’re not pregnant, are you?”

“I’d like to be married first,” Jules says dryly. “And why would you ask that?”

I shrug, tucking my free hand into my pocket. “Seems like everyone’s getting pregnant lately. Gray, Sutton, Kate. It’s like a virus.”

Max chuckles. “Well, when you settle down, little bro, you’ll be thinking of babies at some point.”

There’s no controlling my visible shudder. Not at the thought of babies, but at the thought of settling down. Did you know it’s statistically impossible for a professional hockey player not to get laid if he feels like it? Why would I ever give that up?

“Just make sure you practice safe sex,” Van says with a wink. “Then you’ve got no worries. At least 99.9 percent of the time, if she’s on the pill.”

Jules rolls her eyes and drains her champagne glass. “I’m going to walk around and check out some of this exhibit.”

Max slips his hand around her waist. “I’ll come with.”

“Later,” Van says as they saunter off, then he and I are standing shoulder to shoulder watching the crowd. There’s a silent auction going on right now and people are circulating around the tables to put in their bids. The event is being sponsored by the Carolina Cold Fury and thus some members have to be here tonight to represent the team. I never mind dusting off my tux and rubbing elbows with people, because generally I’m a sociable guy, and who doesn’t like doing something charitable?

“How much longer do you think we have to stay?” I mutter out of the side of my mouth to Van while keeping a pleasant smile in place.

“Done,” I agree as my eyes move over the crowd.

“I’m going to hit up the hors d’oeuvres,” Van grumbles to me. “It’s the only reason I came.”

He hates these things and bitched and moaned about it the entire time he was driving us here tonight. He’s my temporary roommate for now and seems pretty chill, but he can be kind of an asshole at times.