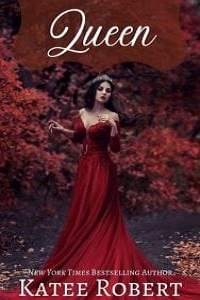 I never gave much thought to pregnancy. Not even when my father sent me to Malachi’s home with the intention of sacrificing me, body and blood, to the trapped vampire. At the time, I’d planned on escaping or dying before he knocked me up.

Look at me now.

I slump back against the tub in the cheap motel bathroom. My head spins and sweat slicks my skin. My mouth tastes… Well, best not to think about that too hard or I’ll start retching again. I drag myself up to the sink and brush my teeth for the tenth time today. An exercise in futility. I’ll be puking again before too long.

As if being sick isn’t bad enough, my thoughts feel as fuzzy as the inside of my mouth. I need to be planning, to come up with some idea to free my men, but I barely have the energy to move. My father has Malachi, Wolf, and Rylan, and I should be coming up with a way to rescue them.

Instead, it’s all I can do to navigate the crappy hotel room where I currently reside.

I stagger out of the bathroom to find Grace lounging on one of the two queen mattresses in the hotel room, flipping through channels with a bored expression on her face. I still don’t know enough about this woman, for all that she’s helped me. She’s a white woman with long dark hair and an athletic build. She also seems to want to be anywhere but helping me. Yet she hasn’t ditched me yet. Her pile of weapons is carefully arranged on the desk, and once again I’m left wondering about this one-woman army.

She glances at me and raises her brows. “You’re a mess.”

“I know.” I drop onto the free bed and wait for my stomach to decide if it’s going to rebel again. After a harrowing moment, it settles and I exhale in relief. “Did you have a chance to look over the plans of the compound I drew up?”

“Yeah.” She sits up. “They’re nicely detailed. You have a really good eye for security and what to look for.”

Of course I did. I’d been planning on escaping the first chance I got. I had my father’s patrols, security measures, and everything mapped down to the smallest detail, and I’d had to do it by memory because if I wrote something down and he found it… I shudder. “At least growing up in that hellhole was good for something. We can help the men.” We have to help them.

“About that.” Grace won’t quite meet my eyes. “I’m going to be brutally honest with you—”

“When are you anything less than brutally honest?” We’ve only been traveling together for two days, but Grace’s bluntness is both a balm and an aggravation. She doesn’t lie; she doesn’t even bother to cushion harsh truths. I sit up. I’m about to get another of those harsh truths right now. “What’s wrong?”

“It’s a lost cause, Mina.” She doesn’t look happy about it. “If I had a trained team, we might be able to get in and get out, but the odds already aren’t good because of what we’re dealing with. By your own estimate, there are hundreds of vampires in that compound. Even if they were only turned and had no powers to speak of, those numbers just aren’t surmountable. It doesn’t matter than only a third or so of them are trained soldiers. Any vampire is a threat to the success of a rescue effort. Add in the fact that all your father has to do is speak and we lose, and it’s impossible.”

“No.” I shake my head. This isn’t right. None of this is right. Malachi and I were just talking about plans a few days ago. We should be safe in the mountain stronghold that is owned by Grace’s family. We should be prepared to win.

Instead, I’m alone with a woman who obviously doesn’t want to help, but just as obviously feels obligated to try. And my men? They’re currently enjoying the questionable hospitality that comes with being my father’s captives. I shake my head again, harder this time. “I refuse to believe that.”

“They’ll kill us.” She doesn’t say it unkindly, and somehow that makes it worse. “If you’re lucky, they’ll kill you, too. If you’re not, your father will lock you up somewhere until you birth that little monster and then he’ll kill you.”

I press my hand to my lower stomach where the little spark of life pulses in time with my heart. “It’s not a monster. It’s barely a cluster of cells at this point.”

Grace opens her mouth but hesitates. When I stare, she finally says, “It’s making you weak. You can barely use your powers, and you’re sleeping more than you’re awake right now.”

I drag my hand through my hair. She’s right. I haven’t been operating at anything resembling normal capacity since I found out I was pregnant a few days ago. I will admit to not knowing much about pregnancy, but it seems like the symptoms have come on far too quickly. I should have weeks before I start to see side effects.