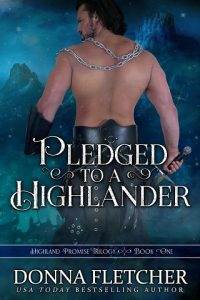 Her skin felt like the softest velvet and was as smooth as the finest silk. He couldn’t stop touching her. He wanted to caress and kiss every inch of her lovely naked body. She belonged to him and only him and that was the only thought that consumed him when he slid inside her and took what belonged to him.

She was his and his alone, no other had the right. He had waited. They had waited for this moment and he relished it. Her sheath was snug, though it opened for him, welcoming him, accepting him, hugging him as he slipped deeper and deeper inside her.

He cherished those words, held on to them, let them seep deep inside him as his manhood felt the tight barrier that blocked him—her maidenhead.

She was his to claim, always had been, and once he broke the barrier she’d be his always. They would be forever joined as one. Even when separated, they’d still remain connected through this special moment when they sealed their vows.

He looked into her eyes and fell more deeply in love if that was possible, her beautiful smile lighting his heart as she whispered, “Come to me. I’m yours.”

Royden woke with a start, jolting up in bed angry to wake from the dream he’d had often in the past five years. Five long years of thinking, dreaming, fighting to get home to Oria, the woman he’d loved since he’d been young and who had loved him—always.

He didn’t know if she had survived the attack on their wedding day that had torn not only them apart but his whole family, his whole clan. The last time he had seen her, she was helping women and children into the safety of the keep. Her fate was unknown to him and he ached to know what had happened to her. He had no idea if his da had died or survived. He and his brother, Arran, had spent about a year together before they’d been separated. He had no knowledge of what happened to him. And there was his sister, Raven, a handful of a lass. If anyone could survive, she could and he hoped she had since he had learned that she’d never been found.

From the moment he’d been captured, he and Arran had talked of escaping and returning home, finding their family and seeking revenge on whoever was responsible for the devastation to their clan. They’d been taken to the most barren part of Scotland where few men braved to go, the land desolate and unforgiving. At times they’d been transported on ships to fight on foreign soil, though they were always returned home to Scotland. They weren’t given a chance once dumped in a battle. It was fight or die.

He ran his right hand through his dark hair that barely touched his shoulders. He swung his legs off the edge of the rumpled bed and grabbed the black leather cuff off the low chest next to the bed. He slipped it on the stub of where his left hand should have been and used his teeth to help tighten the leather strips that kept it securely in place. It had taken time for him to get used to having only one hand and it hadn’t been easy. The day of the attack had been seared into his memory. How could he forget it? It was meant to be his wedding day.

He stood and reached for his shirt. He had grown thicker with muscle over the last few years, his chest and arms heavy with it and his legs as well. Muscle wasn’t the only thing he had gained. He’d also gained scars, some small ones and others large, from all the battles he’d been in. None, though, were as deep as the scar on his heart. It tormented him that he had failed not only to protect Oria, but to wed her, make her his wife, seal their union. That chance had passed him by and was no more.

Not that he didn’t dream or hope that by some miracle Oria had survived and when he was finally able to return home, she’d be there waiting for him.

He turned at the rustle of blankets and shook his head at the woman sleeping in his bed. He hated that after a while he couldn’t deny himself the pleasures of a willing woman. He had a need, especially after battle, and women were supplied to the men in abundance. He seldom paired with the same woman. There were no feelings when he coupled just a need that had to be satisfied. Still, his need troubled him and when he saw that some women had more need than he had known, he wondered, with him gone, what Oria might have done to assuage her need. Not that he would blame her. If anyone was to blame, it was he himself.