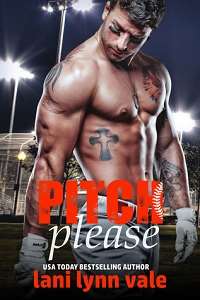 Hockey gives me a zamboner.

-Text from Rainie to Sway

That beautiful woman, with her long brown hair and her nose stuck in the book she was currently reading, tilted her head up with a startled look that began to tug at my heartstrings before she even opened her pretty mouth.

I couldn’t give in to it, though. She was in my seat. I had to sit there.

“I’m sorry,” she whispered, grabbing her bag and scooting over like I’d grabbed her by her hair and physically yanked her out of my spot.

I hadn’t done that, of course. Not that I wouldn’t want to wrap my hand around her luscious, long locks and kiss the fuck out of her startled mouth.

I turned to find our starting pitcher, and my best friend, Gentry Green, staring at me like I’d grown a second head.

“What?” I snapped, wondering just what in the hell his problem was.

His mouth twitched, and I sighed.

“What?” I repeated, this time a little friendlier than the time before it.

The chick was fucking with my routine.

I was a superstitious guy. So, sue me.

I had to have my seat.

“I’m sorry,” the woman whispered hastily as she resettled herself way away from her previous seat. “I didn’t know it was taken.”

“That one is taken, too,” I muttered. “Brakes sits there.”

She stood, this time upending her book onto the floor as she did.

I reached down and plucked it out of the spent sunflower seeds, handing it to her as I got a good look at the cover.

“You like baseball?” I asked teasingly, taking in the title of the book, Baseball for Dummies.

She blushed a harsh shade of red, and I immediately felt bad for teasing her.

The next minute, though, she yanked it out of my hand and turned to face forward, not looking back at me again.

Grinning like the shithead I was, I walked over to Gentry, AKA Brakes, and held my hand out for the paint.

“That’s number thirty-nine’s sister.” Gentry said. “The short stop on the other team.”

Gentry nodded, and I swiped two stripes of paint. First under the right eye, second under the left.

Gentry took the paint and followed suit, only he did his left first, then the right.

Baseball was a superstitious game. It was rare that we ever deviated from our routine.

Gentry shook his head and tossed the paint down into the stack of shit on the ground underneath his seat.

“Not a fucking clue. Girl’s hot, though. I love that she’s our athletic trainer.”

I agreed with that. One hundred and sixty-nine percent.

She was thick and curvy, in all the right places, and I wanted to wrap my arms around her and kiss the hell out of her.