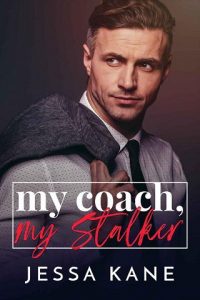 I stand at the side of the Olympic training pool, waiting for my pupil to reach the high dive. It’s after hours. We are the only team left in the facility, all of the other athletes and coaches having returned to Olympic Village. I push Margot because I know she can win. I push her as hard as she pushes herself because her potential is limitless. And I should know because I’ve been training her since she was sixteen. We’ve been together, coach and diver, for two years but I swear I’ve known her a lifetime. I swear she’s been mine for a lifetime.

As always, when Margot is out of my sight, my scalp begins to prickle. I don’t like it. I have to resist the urge to stand beneath the ladder in case she falls. But I have to hide my anxiousness carefully. I have to keep my features impassive, because her parents are standing right beside me, all decked out in their American flag shirts and Tokyo souvenir glasses. Supportive to the point of desperation. If they had an inkling of what I’d like to do to their daughter, they would faint dead away into a tangle of red, white and blue.

That’s what I keep telling myself every time I get the urge to touch. I’ve built up the trust of Margot and her family. Taking my obsession to the next level would be unethical. And sick. At thirty-six, I’m only five years younger than her father. I was there the day Margot got her driver’s license, for godsakes. Never mind that she has matured significantly since then.

I sense movement above me and watch hungrily as Margot’s toes wiggle over the edge of the diving board. There’s no way to stop the thickening of my cock. Not when I can see her from this angle—and since I see her from this vantage point a hundred times a day, I’m hard as nails non-stop. The bright lights of the Olympic facility highlight every contour of her regulation black bathing suit. A suit that is wet and clingy after hours of practice.

My eyes trace the mound of her pussy, the jut of her tits.

I clear the lust from my throat and she adjusts her swim cap, looking down at me expectantly. Awaiting my instructions. “Commence the tuck sooner this time, Margot. Clean lines. When you’re ready.”

Only a coach or a judge would notice the slight bend in her left leg.

Her parents chuff proudly, exchanging a hug. They’re full of hope for the beginning of the competition in two days. As am I. But for the last few weeks, there has been something tugging at my subconscious. Every time I’m around Margot—and that’s near constantly—I notice a new tension in her beautiful shoulders. She can’t seem to sit still or concentrate, squirming around on the training bench during my lectures.

She tosses and turns in her sleep, kicking off the covers onto the floor and angling her hips in all manner of enticing positions, stretching her little cotton panties over her cunt. Making me sweat in the shadows of her designated room in Olympic Village, to which I have the key. I have a key to her home back in Austin, Texas, as well. Watching Margot sleep isn’t exactly a new undertaking for me. Out of necessity, I’ve learned to ejaculate without shouting. I’ve developed a routine of coming into a pair of panties from her drawer, bringing them home afterward and replacing them the following night. Unless I keep them.

I tend to keep them a lot.

What I do isn’t right. It’s a violation of her privacy. Her trust, as well as the trust of her parents. But I tell myself that it’s more forgivable than peeling those tight panties down and tunneling my way through her virginity. Whether it’s right or wrong, I think about it, though. I think about making love to sweet little Margot every goddamn minute of the day. Sometimes I can’t fit a single other thought around those desperate, depraved ones.

She surfaces at my feet and I reach down, helping her out of the pool.

“How was that?” she asks, breathlessly. Searching my eyes. Making my heart sprint at a dizzying speed inside of my chest. God, I would do anything to pull her into my arms. “Better?”

“Better,” I say briskly. “Just not where it needs to be yet.”

I hate the way her shoulders fall in disappointment. She’s incredible. A phenom. But it’s my job as her coach to keep pushing until she’s good enough to win the gold. Her parents have entrusted me with this mission. I don’t want to fail them and I refuse to fail Margot.

As my pupil has been wont to do lately, she fusses with the strap of her bathing suit, restless energy rolling off her in waves. “Well, then…” She blows out a breath. “We’ll just stay until we get it right.”