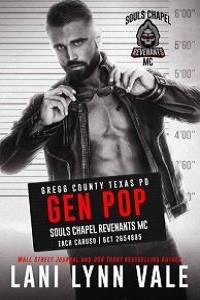 The woman behind the counter looked uncomfortable as hell.

“The kind that doesn’t have a delivery truck show up, moron.”

My eyes went to the old man in the corner of the front porch who’d been steadily rocking in his rocking chair since I’d arrived at the store.

He had great hearing if he could make out what was being said at the counter when it was a half a store away from him.

“Listen,” he said. “This is the only store between here and my house. What else you got beer-wise?”

Crockett pointed to the cooler doors. “That’s literally all we have. Like my grandfather so eloquently said, we didn’t have our delivery today like we usually do. They said they would retry to deliver on Monday.”

I winced, knowing what was coming next.

“Retry?” the man barked. “What the fuck does retry mean?”

“It means that she was out on lunch break when they tried to deliver, at the completely wrong time seeing as they usually deliver around ten in the morning, not two, and she has to eat by a certain time or shit starts to hit the fan for her. So, she missed it seeing as I was napping in the back room at the same time. Shit happens. Now go the fuck away and try not to come back. You’re annoying the piss out of me.”

“Murphy,” the curvy brunette growled, getting more upset with the old man than she was with the customer who deserved her ire. “Please, you’re not helping.”

“Sure, I’m helping.” The old man, obviously named Murphy, sauntered into the room. “You’re just too nice. People like this dolt don’t care that you’re human. They care that you’re out of beer, and they can’t get it, so they’re going to be assholes.”

That’s when her eyes came to me, and my breath caught.

Though her body was banging—I loved curves, and the woman had a whole lot of them—and her face was beautiful, her eyes were just… mesmerizing.

I’m talking, stare into them and fall into a deep well of nothingness because all you can think about were how fuckin’ out of this world her eyes were.

They were like looking into the bluest of eyes through a crystal. The iris of her eye was like a starburst explosion of crystal blue, bright light blue, almost white, and streaks of darker blue that were just mesmerizing.

Seriously, there weren’t adequate words in the English language that could describe her eyes.

But yeah, her eyes. Wow.

“Oh, I’m sorry.” She smiled, her straight white teeth only adding to her beauty. “I didn’t see you standing there. Can I help you with something?”

The man that cut me off, Mr. Impatient Bud Light Guy, looked over and saw me.

“I want a burger.” I gestured toward the grill. “Everything on it but cheese.”

She frowned, looking down at her watch.

It was ten until closing time, so I knew that it would be a long shot. But I was hungry, my house was empty, and this really was the only place that had food to eat between here and town. A town called Kilgore, Texas that was over thirty minutes away from Souls Chapel, Texas.

But she waved me off. “No, it’s fine. I can make you one. It’s not like I’ve cleaned up all the way yet. How would you like your burger cooked?”

That question threw me off guard.

It’d been awhile since I’d been on the ‘outside’ between holding cells, waiting on trial and actual jail so, I hadn’t been given the option of how to cook anything recently.

It was startling how unprepared I was for the question.

“Just cook it however you want,” I managed to say.

She nodded once and then turned the grill on before going back to the man who’d been asking for beer.

“I’m sorry,” she repeated. “Is there anything else I can get you today?”

The man hadn’t looked away from me yet.

Because I was still in my prison uniform.

It was an orange jumpsuit with ‘JAIL’ written down one leg, ‘Bear Bottom Penitentiary’ written on the breast pocket, and so tight around my thighs that it was cutting off circulation.

“In case you’re wondering,” I said to the man. “I’m not a fugitive of the law, and I didn’t escape jail. My clothes no longer fit, and I didn’t want to stay there any longer than I had to. Therefore, I wore my prison-issued uniform out of the gate.”

The man blinked, nodded once, and then took off without another word.