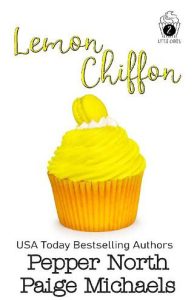 Daisy Galante adores hanging out with the Littles at Blaze, until she meets creepy member Leo. While escaping the pretend Daddy’s unwarranted punishment, she is rescued by her friend and dungeon master, Tarson. Between Leo and the thugs terrorizing her shop, she’s in desperate need of some tender loving care.
Stern, ex-military cupcake baker, Tarson Kirkwood, is enchanted by the delicate floral-shop owner. When she calls him in the middle of the night in need of help, he’s beyond pleased to learn he was the first person to pop into her mind. His newly claimed Little is in danger, though, and she’s about to learn that his nickname Teddy disguises a fiercely protective grizzly side.

“I love how it smells in here!” Erica announced as she walked into the floral shop.

“Hi, Erica! I’m glad you’re here. I just got a big order for a wedding. Their first choice of florist has an out-of-business sign on their door,” Daisy shared, rolling her eyes. “I know everyone is looking for a bargain, but really! Choose someone reliable.”

“Was that The Perfect Petal? I thought I had breaking news to share.”

“Yep! They went belly up. I hate to see people lose their shop, even if they are my competition. Start making boutonnieres. I made one as a model. It’s on the bench there,” Daisy waved a hand toward the floral design table.

“Twenty-eight. And that’s just the boutonnieres. I haven’t even started on the bouquets.” Daisy tried to prevent her eyes from rolling again. She ended up looking cross-eyed, provoking a laugh from her assistant.

“There are that many men in the ceremony?”

“Yes. It’s a massive wedding.” Daisy read from her list on the wall in front of her. “There are eleven groomsmen, the groom, four fathers—the bride and groom both have a father and a stepfather—three grandfathers, four ushers, a flower boy, a ring bearer, and one male reader. We’ll make two extras because someone is bound to destroy theirs before the wedding.”

“Why do I want to sing ‘And a partridge in a pear tree’ at the end of that?” Erica joked.

“Because you have a quirky sense of humor that compliments your floral skills,” Daisy complimented as she pressed roses into the massive wedding bouquet. The order would make her monthly numbers look a lot better, but she’d be living in the store until everything was complete.

Daisy looked after her assistant and smiled. She’d worked with her mother since Daisy had been old enough not to bruise the flowers as she sniffed them. When her parents decided to move to Florida, the store had been lonely. Erica’s brass personality livened it up—a lot.

“Don’t work all night, Daisy. Go home,” Erica directed as she hung up her apron. “I’m sorry I can’t stay later. I’ll come back early in the morning to finish up the order.”

Daisy waved her off. “Don’t worry. I’m just glad we close at five on Sundays. At least I won’t have customers coming in after you leave. You can’t miss your dad’s birthday party! I’ll just get a couple more bouquets done and then I’m out of here,” Daisy promised. Sometimes, Erica was more of a mom than her mother had been.

Erica pulled out her phone and took a picture of Daisy. “If you’re in the same clothes tomorrow when I get here…”

“You!” Daisy made shooing motions to hurry along her assistant.

When the door closed behind Erica, she turned back to the bouquet. She had no intention of leaving until the last of the bouquets were done. It might take her half the night, but she knew she wouldn’t be able to sleep if this job wasn’t finished.

A while later, she glanced at the clock. Six o’clock. She was making good time. There were still a lot of bouquets to arrange, but she was determined.

“How many more of these do I still need?” Daisy asked herself, propping a hip against the table for support. Each rose felt like it weighed five pounds.

She jumped as the back door abruptly opened and smacked the wall. Daisy tried to control her facial expression to not show panic as four men invaded her store.

“Really? I think you’ll open to let us smell the roses,” one man said with an evil laugh. The others echoed him.

“We’re here to provide protection for you. You know—keep the bad guys away.”

“Thank you, but I’m sure I’m fine here without your help,” she answered, moving a hand toward the pruning shears she used to cut the stems.

“No need to arm yourself, lady,” the ringleader commented as he snatched the would-be weapon. “You and I are going to stand here real safe as the guys find our fee.”

When Daisy opened her mouth to protest, the man waved the shears. “I bet this would take off a finger. Would that make it tough to arrange flowers?”

Cringing at the thought, Daisy dropped her hands down to the workbench and watched helplessly as the men ransacked her store looking for money. “I already went to the bank. I don’t have anything here.”

He just glared at her with a deadly stare. One by one, the men returned to stand at his flanks. Each shook their heads as they joined the group.

“Nothing but flowers,” one remarked.

“I think we’ll each take one of these,” the spokesman announced, reaching a hand for a completed bridesmaid bouquet.