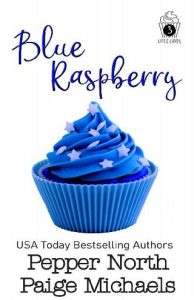 Welcome to Little Cakes, the bakery that plays Daddy matchmaker!
Lark Adams is a successful real estate agent who’s ready to outsell everyone. While preparing a property for an open house late one night, she realizes how dangerous her job can be.
Police officer Wyatt Hazelton is dedicated to equipping women with self-defense skills. When the tantalizing woman he suspects is his Little gets in a spot of trouble, he’s hell bent on showing her how to protect herself. He has a vigilant Daddy eye on her.

Lark Adams was holding a stack of business cards in her hand, seconds from setting them in the little stand on the kitchen island, when a loud crash made her jump. The business cards leaped out of her hand to rain down all over the kitchen floor.

Lark screamed and then spun around in a slow circle, heart racing, trying to find the source of the noise. She couldn’t see anything or anyone.

She was supposed to be alone in the house. Not only that but the house was empty. Completely empty.

The owners had moved out a week ago. Lark was their realtor, and now that the place was ready to show, she was preparing for an open house tomorrow. She’d already walked through every room to double check that the house was in prime condition to make the best impression. Each room had been completely cleared of possessions—even the closets and cabinets.

What could have made that noise? Lark considered making another round, but something made her reconsider. A bad premonition settled over her. Shaking as she held her breath, Lark listened for another sound. Was someone else in here with her?

Another bang echoed through the silence. Leaving her business cards scattered all over the floor, Lark snagged her purse off the island and rushed out the front door without looking back. She raced to her car, fumbling the keys before finally managing to disengage the locks and yank the door open.

She was breathing heavily as she slid inside, locked her car door, and reached for her phone. Should she call 911?

With each passing moment, her fear seemed less warranted. It felt foolish to call the police. There was no way someone was inside the house. If anyone had wanted to harm her, they wouldn’t have needed to scare her. They could have simply grabbed her right out of the kitchen.

There is someone you could call, she remembered.

Wyatt Hazelton. Just thinking of the sexy cop with his dark good looks and knowing eyes made her tremble. She’d met him a few times when her friend Ellie was dealing with a group of thugs who harassed her in her bakery, Little Cakes. He always seemed to watch her.

Every time she thought of him, her heart skipped a beat. She tried not to think of him often. After all, he surely didn’t think of her. He was a buff police officer. He probably had women crawling all over him. Even though her friends thought he’d flirted with her the last time she’d seen him, she refused to believe that.

She did have his card though. Didn’t she? She’d tucked it into her purse after he’d handed it to her. She doubted he actually intended for her to contact him. He’d simply been polite. After all, she wasn’t the only one he’d given his card to. He’d invited Ellie and her employees at Little Cakes to take a self-defense class with him. Lark had been there helping Ellie with her opening that day.

No. It was foolish to think he had any particular interest in her even if she did have trouble getting him out of her head. There was no denying he was taking up a lot of real estate in her brain.

After glancing back at the house, she opened her purse to look for his card. When she found it and flipped it over, she discovered he’d hand-written his personal cell on the back.

Did that mean anything? Maybe he’d written his cell on the backs of all his cards. Should she call him?

She thought about her options. What if someone was in the house? A squatter could be hiding upstairs or something. Old scary movies popped into her mind. Maybe they’d been following her from room to room, staying just out of sight? That sent a shiver down her spine.

Lark needed to return tomorrow morning at nine to prepare for the open house. She’d be scared out of her mind to enter the house alone in the morning. Did that curtain just move?

She could call 911 like a normal person, but again, she felt ridiculous.

After flipping the card around in her palm a few times, she grabbed her cell phone and dialed Wyatt’s number.

It rang only once before his deep voice filled her ear. “Hazelton.”

“Uh, Wyatt. This is Lark Adams. You probably don’t remember me, but—”

“Of course, I remember you, Lark,” he interrupted, his voice lower than how he’d answered the phone. “How are you?”

She swallowed and glanced around. Her predicament seemed even more absurd now. “Well, I uh… It’s silly, really. I shouldn’t have bothered you.”

She licked her lips. She already had him on the phone. Might as well tell him. “I’m at this vacant house, and—”

“Why are you at a vacant house in the dark? It’s almost eight o’clock.”