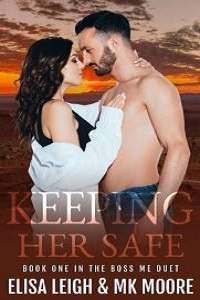 “She is headstrong, Johnson. This really is the only way it will work,” my new employer, Jason Lipton, says

“Mr. Lipton, that’s not really what I do,” I try to explain. I know nothing about being an assistant. Choke holds, effectively dodging bullets, protecting others from those bullets, that’s more my forte.

“It’s Jason, please. Trust me, I know my sister. This is the only way. She’ll never agree to round the clock protection, so we won’t be telling her. Let me know if this isn’t something you can handle, and I will find someone else who is more capable.”

Looking over the file again, I know that I won’t be letting anyone else protect her. She looks so soft in her company ID photo. So soft that I think it will be hard to keep my hands to myself when I meet her in a matter of minutes.

Their parents died unexpectedly in a boating accident five years ago, leaving Stacey in her brother’s care when she was sixteen, almost seventeen. Their parents left them everything, including their multibillion-dollar company Villain Video that sold and managed an online multiplayer role-playing game. Jason and Stacey eventually sold the company to the vice president of Villain Video, Victor Colander.

Jason and Stacey started their own company when she was still in high school. Jason graduated at the top of his class with an MBA from one of the country’s best Ivy League schools. Stacey opted not to go to college as she is the tech genius. Lipton Industries specializes in app development. They set out to start their own empire, and in five short years, they have more than succeeded. They are growing rapidly. So much so that Stacey has become the object of a sick fuck’s desires.

“It’s not a matter of not being able to handle it, Jason. I just know that she’ll see right through me.”

I can do this. It’ll be easy. Famous last words. Jason fills me in more about what's been going on. Mail deliveries to both their home and office without postage, meaning her admirer has physically been in both places. That knowledge sends a sliver of fear straight through me. This is personal, and it has the potential to get very dangerous. I am not sure what the person is thinking, though. The two most severe packages contained severed doll heads covered in what turned out to be pig blood and locks of her long dark hair. From the damage, the crime lab determined that it came from her hairbrush. Detective Locklear from PPD is our contact. He took the original call when Jason called the police. Stacey explained to her brother that she cleaned the brush and threw her hair in the trash. Her wing of their mansion, just outside Phoenix, is supposedly safe and secure, but I'll be the judge of that. My men are currently doing a sweep on the house while Stacey is safe in the office.

Twenty minutes later, I am following Jason down the long glass hallway to the office at the other end of it.

We come to a halt in front of her office, and he knocks.

"Come in," the sexiest voice I've ever heard calls out.

We enter the room, and I realize that I am not prepared for just how fucking beautiful she really is. She’s leaning over a desk, reaching for something just out of her reach. When she looks over at us, I’m caught in her web. Her picture did not do her justice. She’s tiny, maybe five foot even. Even with how tiny she is, she’s still got curves for days and the sexiest ass I’ve ever seen. She’s got the face of an angel and full pink pouty lips that are begging to be kissed. All the air in my lungs comes out in a whoosh. Fuck. This is going to be the hardest thing I've ever done.

"What's up, Jace? Why did you bring a cop with you to my office?" She asks, walking back to the mess of papers on her desk and sitting down.

"This is Darius Johnson. He's your new assistant," Jason says without missing a beat. Her cheeks redden. She rises after tossing her pen down.

"Jason, I am perfectly capable of selecting my own assistant."

"After that gold-digging train wreck from last week, this one is on me," Jason says, causing me to smirk.

"I apologized about that. I had no idea she would lie naked on your desk. Poor Mrs. Garry," she says, putting her face in her hands as she laughs.

"I don't think she'll ever get over it, Stace. Ever. She's old. She could have had a heart attack. So as I was saying, this is Darius." There's laughter in his voice as he speaks.