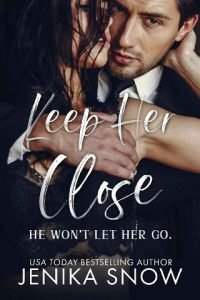 Joey Bacelli stepped into the abandoned warehouse and dropped his cigarette on the ground. He snubbed it out with his black polished shoes, and blew out the remaining smoke he had held in his lungs.

He fucking hated smoking, but it was an evil he just couldn’t kick, especially when he was stressed the hell out.

“This way, Capo,” Niklo, his younger brother, said and led him forward.

The warehouse smelled of decay and mold, and the windows above them were broken out. The sound of their footsteps hitting the cracked and dirt laden ground beneath their feet bounced off the debilitated walls. This place was a shithole, and probably not even the wood that held it together was worth anything.

But they used it for things that were less than legal, especially if shit needed to be taken care of. Normally Joey would have a lesser ranking man in the family do this, but this was personal.

Niklo pushed open the door that led to one of the storage rooms, and moved aside. In the center of the room hung a single, cloudy light bulb, and sitting right under that was the man that was going to die by Joey’s hands tonight.

Joey stopped in front of Michael Leno Kostano, one of the members of the smaller Italian crime families that were trying to make a name for themselves on the east side of the country.

Joey didn’t mind competition, kind of liked it to a certain degree even, but this little fucker had been running his mouth about the Bacelli family since moving into the city, and that shit had to stop.

Joey grabbed another cigarette out of the inside of his suit jacket and placed it between his lips. He patted his pockets for a lighter, and cursed. “Fuck, can you believe I forgot the damn lighter in the car?” he said to no one in particular and kept his attention on Michael. “You have a light, Mike?” Joey asked and cocked an eyebrow.

Michael started struggling against his bounds. Little Johnny, one of Joey’s guys who stood behind Michael, grabbed Michael’s hair and yanked his head back violently. Michael squeezed his eyes shut and started mumbling something from behind the gag, but no one responded.

“No?” Joey asked again, and Michael shook his head. Niklo stepped up beside Joey and held out a lighted match.

“You should quit that shit,” Niklo said and then moved back behind Joey once the cigarette was lit.

“I should do a lot of things, little brother,” Joey said and inhaled the cigarette. He stared at Michael, and then gestured for Little Johnny to move away. Holding his cig between his lips, he removed his wool black duster, handed it to Niklo, and then took off his suit jacket. Once Niklo had that as well, Joey started rolling the sleeves of his shirt up his forearms. Michael started struggling, but Joey tsked. “Calm the fuck down, Mikey,” Joey said from around his cigarette, and then took one more drag off of it before flicking it away. “You knew what the fuck would happen if you kept running your mouth about us, didn’t you?” Although Joey stated it as a question, it was rhetorical.

Michael started saying something again, and Joey gestured for Little Johnny to remove the gag. “Joey, man, you have this all wrong,” Michael said, although it fell on deaf ears.

“I have it all wrong?” Joey asked, and reached behind him to grab his Glock, which was tucked at the small of his back.

“Yeah, man, all wrong. Ain’t no one talking shit about a Bacelli.”

Joey stared at the other man. Michael’s face was swollen, black and blue, courtesy of Little Johnny and Niklo. Blood dripped out of Michael’s busted up nose, down his mouth and chin from his split lips, and covered his chest, which had knife wounds etched into the flesh. Joey cracked his knuckles and grinned. “See, I heard from a very reliable source that you’ve been saying all sorts of shit about me and my crew out in the open. Even mentioning a deal that is going down with my family. You know shit that you shouldn’t, which means I have a rat in my crew, and believe me I’ll find that shit out.”

Michael started shaking his head. “Who told you that?” he stuttered out. “Because I haven’t said shit, and I haven’t heard anything from anyone.”

“And I’m supposed to take your word over one of my most trusted men?” Joey asked, and tilted his head to the side. He stared at Michael for several seconds, and then looked at his gun.

He checked the chamber, took out all but one bullet, and then spun the chamber. Michael’s eyes widened, because he knew what was going down.

“See, you and the Gondalo crew are new to my territory, and you stupidly thought you could come in here and take me and my crew down?” Joey asked with a calm voice. He didn’t get rage-filled and psycho like some guys did. He didn’t necessarily enjoy seeing blood cover his clothes, hands, and face after whacking a guy. But this was his life, his family, and it was who he was.