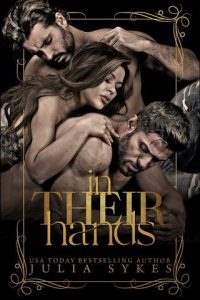 My father sold me to the devil: an arranged marriage with Dante Torrio, sadistic capo and would-be usurper. But before their bargain is complete, I'm stolen away by Luca Vitale, heir to the Vitale crime family. I'm a pawn in a brewing mafia war, a captive bride in a power play between two cold-blooded monsters.

I hate Luca for forcing me into marriage, but he'll do anything to mold me into his obedient wife. The longer I remain trapped with him, the more I come to crave the dark pleasure my unyielding husband offers me. He is fiercely possessive and jealously guards me. He protects me from his enemies, especially Dante, who is determined to steal me back.

Which fate would be worse? To belong to the ruthless mafia prince or to the devil himself?

“Hello, little bird.” A deep voice skated over the back of my neck like velvet, making my nerves jump. “I’ve been waiting for you.”

I whirled, heart jumping into my throat at the man’s proximity. In a hurry to obey my father’s demand for a meeting in his study, I hadn’t noticed the stranger lurking in the shadows of our cavernous foyer. He leaned casually against the banister of the curved double staircase, head tipped at a curious angle. Vibrant green eyes clashed with my shocked hazel gaze, his glittering with amusement that held an arrogant edge. His square jaw was darkened by stubble, which matched the slightly untidy tumble of dark curls around his angelically perfect face.

A fallen angel, judging by the way he was looking at me. His eyes roved over each of my facial features before dipping lower for a fraction of a heartbeat: a brief but intimate appraisal. His white teeth flashed in a purely predatory smile, and he prowled toward me. As he stepped fully into the light, the shadows cleared from beneath his high cheekbones, and recognition finally dawned.

Dante Torrio. I’d seen him at my father’s parties, but I didn’t truly know him. He was too painfully beautiful to look straight at him, like staring into the sun. And Father never allowed us to interact with men beyond a polite smile and demure nod.

He reached the edge of my personal space, then stepped into it as though he had every right. He towered over me, almost a foot taller than my five-foot five frame. Those striking eyes pinned me in place, peering straight into me. The slightly cruel twist of his full lips sliced into my chest, stealing my breath. His sudden nearness was shocking, his masculine scent suffusing the air around me with a foreign, enticing perfume. I’d never stood so close to a man; men were forbidden. Well, the only time I was this close was when Father tasked one of his goons with punishing me.

But this was different. Dante wasn’t looking at me with malice in his glittering eyes. The sharpness that pierced my soul was something hungrier than violence. My belly flipped, and I took a wary step back.

His grin turned lopsided, amused by my trepidation. A shiver raced down my spine, and warmth suffused my cheeks.

I took another step back, licking my suddenly dry lips. Dante’s gaze darkened as he watched the flick of my tongue and focused on my mouth. Something clenched between my legs, and my face burned with an embarrassed flush. His intense attention made me squirm, and judging by the perverse pleasure that illuminated his sharp features, he was enjoying my apprehension.

I lifted my chin and met his taunting gaze head-on. All my life, my will had been crushed by brutal men, any signs of defiance quickly obliterated by a harsh slap or thundering shout. But no matter how many times I had to swallow my pride and bend, I kept my righteous rage stoked deep inside my chest.

Dante wasn’t one of my father’s men. He had no right to punish me. And I didn’t have to stand in his imposing shadow, shrinking beneath his cocky, self-assured stare.

His smile sharpened to something almost feral, and he grasped my hand with thick fingers, drawing my arm through his with a gentle but unbreakable grip. Sparks tingled where our skin touched, his rough callouses rasping over my softer palm. He rested my hand on his forearm, and I felt the raw power of his corded muscles even through his perfectly tailored suit.

Something tugged at the pit of my stomach, as though pulling me closer to his heat, his intoxicating scent.

I swallowed hard. “I have to go.” I hated the way my voice wavered, and I didn’t pull away from his allure.

I had to go meet my father in his study, or I would definitely be punished for my tardiness. No matter how fascinating I found this unnerving connection to Dante, it was dangerous. In so many ways. If Father saw me touching him…

I tried to yank my hand free, but his fingers firmed around mine, gluing my palm to his arm. He started walking with sure, confident strides, as though he was escorting me to a ball.

“We’re going to the same place,” he informed me, his voice still lilting with amusement. He liked that he was making me hot and flustered.

Defiant anger spiked, cracking my usual composure. I jerked away from him. “Let me go!”

I stumbled as he abruptly released me. His mocking chuckle rolled over my skin, making my flesh pebble and dance as though at a physical touch.

My cheeks burned with anger and embarrassment, and I quickly righted myself. I walked stiffly toward my father’s study, my low, sensible heels clicking across the marble foyer. Dante kept step beside me, half an inch too close for polite company. I could still smell his heady cologne, and his body heat caressed my side. His dark pleasure and masculine power pulsed over me, and I suppressed the tremor that teased along my bones.