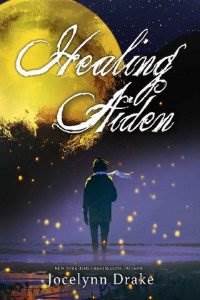 A very long time ago

Aiden scanned the dark forest crowding close on all sides. The moon drifted in and out behind heavy clouds as if she didn’t want to be spotted watching them. He would have preferred she stay hidden—her light was making it easier for their camp to be spotted. But the fires they’d lit were doing that as well.

They were only a day from home.

One short day of travel away from his entire world changing forever.

Aiden had known this was coming for a few years now, but was it so wrong that he’d hoped for more time?

A noise had him spinning toward it, his sword half out of his scabbard before his eyes fell on Ronan’s familiar smirk. The firelight danced across his handsome face, highlighting a sharp nose that had been broken more than once and full lips nearly lost to a thick black beard he’d grown against the bitter cold. Shadows caressed broad shoulders and long legs that put him just a few inches taller than Aiden, but the man’s personality and bearing made him seem so much bigger. Ronan had gone to bed hours ago. What the hell was he doing up and wandering around the camp?

Aiden shoved his sword into its scabbard and straightened, only to have Ronan tilt his head to the side in silent invitation as he walked toward the edge of camp. Flattening his lips into a hard line, Aiden held back an irritated growl and followed him because that was exactly what Ronan was expecting him to do. He’d followed Ronan since they were children, getting into endless amounts of trouble and countless bloody battles when they were older.

Moving silently through the camp, he nodded to a couple of other men on guard duty as he trailed behind Ronan.

Soon to be King Ronan, the moment they made it back to the castle walls.

The thought came unbidden, and Aiden was too tired to give it more than a halfhearted shove out of his mind.

Aiden’s frown dug deeper as Ronan kept walking, much farther than necessary if he only meant to take a piss. He glanced over his shoulder to find the fires from camp were just tiny pinpricks of light between the dark trees.

The farther Ronan walked, the more danger he put himself in if anyone was watching their camp. Ronan’s father had been on his deathbed already when the news reached them of his waning health. They’d been traveling for a sennight to reach his side. If the family’s enemies hoped to overthrow their rule, they needed only to kill Ronan now before he could take the throne and control of the army.

There had been no trouble on the road so far, but Aiden was not taking unnecessary chances with Ronan’s life. They were too close to his friend achieving his destiny.

He could feel deep in his bones that Ronan was meant to be king. His childhood friend would be a great king. Strong, compassionate, smart, brave. He was exactly what their people needed to bring an end to the wars and finally unite the various squabbling fiefdoms.

“Dammit, Ronan,” Aiden snarled, unwilling to raise his voice above a harsh whisper. “What the devil are you about? This is too far from camp.” He quickened his pace so he could grab Ronan’s shoulder, spinning him around.

When Ronan turned, Aiden was greeted by the broad, mischievous smile he knew so well. The moon broke through the clouds at just the right moment, allowing Aiden to see the laughter dancing in his prince’s dark eyes. They were opposites in so many ways. There was a swarthiness to Ronan’s complexion to go with his almost midnight eyes and liquid black hair. He could have been called king of the ravens. In contrast, Aiden had bland brown hair and fair complexion against amber-brown eyes.

“I was curious to see how far you’d let me go. And you never call me by my name anymore.”

“Forgive me, my prince,” Aiden said quickly. Fatigue was weighing heavily after their long journey, along with dark thoughts he’d didn’t want plaguing his mind when he needed to be focused on Ronan’s safety. “Soon to be my king.”

Ronan made a disgruntled noise in his throat as he started walking again, but he didn’t get more than a few steps before he stopped and stared out into the black forest. He stood, only partially turned away from Aiden, allowing his friend to see his jaw muscles clench.

“You will be a great king,” Aiden continued in a low but strong voice. “The people will love you. You’ll bring peace and prosperity to the land.”

Ronan swung toward Aiden, his upper lip drawn in a snarl. “And what about us?”

Those angry words lanced through Aiden’s heart, knocking him back a step. Most wouldn’t blink at Ronan’s question. There was no Ronan without Aiden. No Aiden without Ronan. They’d been each other’s constant companions since they could walk. When Ronan’s family ascended to power and was supported by Aiden’s, it was only natural that Aiden became Ronan’s trusted bodyguard as well as advisor.