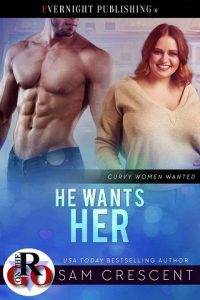 “He’s done this on purpose,” Sally Bright said as she glanced across the street.

“Sure. Hank Owens decided to quit his city job and relocate back home, all to spite you. I’m sure that’s what it is and it had nothing to do with his health,” Rebecca, or Becks as she often called her, her baking assistant and sometimes loyal friend, said, laughing as she did. “You know, he’s not going to take your clientele from you. He offers only baked goods, the sweet kind, while you offer a hell of a lot more and you know it.”

“Becks, he opened up a store right opposite me. A bakery no less.”

“I didn’t think you and Hunk had any issues.”

“Come on, he got that nickname in high school.”

“Exactly my point. You’re treating this as some kind of high school vendetta. He works next door and he hasn’t taken any of your regular clients and in fact, we had three additional advance orders for next week.” Becks hit her on the shoulder with the order book. “Stop worrying.”

She wouldn’t usually worry, but Hank was popular and there was no getting away from it. Women adored him.

He was the most popular guy in school but also the kind of guy everyone wanted to see succeed. Hank was nice through and through and hadn’t even been the bully type. In fact, if her memory served her well, he wouldn’t even hang around with guys who did bully. He’d make sure they all suffered as he didn’t believe hurting anyone was right.

Then, of course, he’d left town, become some big, hotshot Wall Street person, and then six months ago, it was announced he’d bought the shop opposite her, opened it up, and now she’d been dealing with his bakery across the road.

Sales hadn’t gone down, which was a shock.

Whenever there was a rival store coming to town, there was always a major concern on the little person.

Now, she just had to contend with Hank taking most of the female clients, but they’d also pop into her bakery and cake decorating shop. She also offered fully-catered-for parties, and a lot of people asked for basic dinners to be made as well.

Yes, she could have done with the additional help, but now that it was going to Hank, she was worried.

Stepping back into her store, she glanced over the order, seeing a couple of vegan clients who had also asked if she could start catering for them, to which she agreed. She had a hard time saying no to anything.

As she ran the pen across her lip, she found all the necessary ingredients she’d need and started to make a list. Once it was all done, she phoned her suppliers and had everything ready to be delivered by the end of the week.

Happy with herself, she closed up shop as it was getting late. She started early and always liked to have the shop closed by three, so she could relax. Becks constantly told her she was doing too much. Her friend was already gone and as she stepped out of the bakery, she was surprised to see Hank doing exactly the same.

In the past six months, she’d avoided any contact with him, other than to glare—hopefully not so obviously through her shop window across to his. She’d hoped she was in the clear but as she bent down to deal with the lock, she felt him behind her.

“I’ve been trying to catch you since the moment I opened this place,” Hank said.

His voice. She’d heard a couple of customers talking about how his speech alone could make a woman orgasm and damn it, they hadn’t been exaggerating. It had a depth that traveled down her spine and made her toes tingle.

Not good. She wanted to hate this guy.

“Sally, are you ignoring me?”

She stood up and spun toward him with a smile, pushing some of her red hair out of the way. “No, I’m not ignoring you. I was listening to you. You wanted to talk to me?”

“Yes, I’d been hoping to catch you for a little while now.”

“You’ve got me.” She looked over at his shop. “I thought you were open later.”

She frowned, tilting her head to the side.

“Have I pissed you off?”

She stopped a few steps away from him. “Excuse me?”

“You won’t stay and chat. You won’t have a drink. I can’t help but wonder what I’ve done wrong.”

He was tall, muscular as well. Why couldn’t he be a little ugly or in some way irritating?

“With all due respect, Hank, er, you opened a bakery right across from me.”

She laughed. “You do realize that I’ve owned this spot for ten years.”