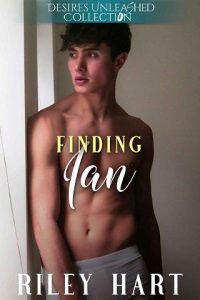 The sun glinted off the pool, giving it a shimmering look. Pop music played through the speakers Aidan had installed in the backyard after my best friend, Finley, had mentioned it offhandedly one day. That was the way things always seemed to go. Aidan, Finley’s partner, spoiled Fin like crazy. There was a time when I was maybe a little jealous—not that I would ever tell Finley that—but then I remembered that he crawled around the house for Aidan, called him Sir, got punished, and served Aidan, and that jealousy evaporated right the hell up real quickly.

Finley loved that shit. It was what he wanted, what he’d always wanted, even before Aidan. I would lose my damn mind if I did the stuff Finley did, so yeah, he might have a wonderful Sir who loved him, who would do anything for him, and lived in a big, beautiful home, but I wasn’t jealous. I didn’t think I was, at least. Sometimes I might have wondered a bit, then reminded myself that wasn’t me. The kind of trust you had to have to do what they did…that was something I didn’t have to give.

“I’m so glad it’s summer,” Finley said from the chaise lounge to my left. Our friend Jordan sat to my right.

Fin and I had met in a foster home. The parents hadn’t cared about us—we were a paycheck for them—but then they caught us kissing, and they cared a whole hell of a lot. I turned eighteen right after, so Finley and I took off. He was seventeen at the time, and I’m not gonna lie and say it was easy. LA wasn’t for the faint of heart, but I’d loved him like a brother and would have done anything to take care of him…I’d done things to take care of him, when one or both of us couldn’t find a job or a place to live. Fin didn’t know about some of the things I’d done to keep us afloat.

Jordan had come around more recently. He and Finley had met at school, and Jordan had hit on him. It didn’t go anywhere, since Finley was crazy about Aidan, and, well, he and Jordan wouldn’t be compatible sexually. But we’d all become good friends. That had been a little over two years ago.

“Me too. I love summer,” Jordan replied. “I swear, it feels like I’ll never graduate. I can’t afford to take more than a couple of classes at a time. Sometimes I feel like I should just drop out. What’s the point?”

They were both attending a local community college. I didn’t get it, myself, but I was proud of them for getting shit done.

“I could help…” Finley offered tentatively. “I have the money from my inheritance, and I know Aidan would—”

“No. Hell no. I told you I wanted a sugar daddy, but I don’t want to take money from my best friend or his Sir.” Jordan winked as if he was joking about the sugar daddy thing, but I wasn’t sure if he really was.

Such a Finley thing to say or do. He tried to give me money all the time too, but I never took it. Finley was the only person I ever truly let in. I wouldn’t be his charity case. And he only had money outside of Aidan now because Aidan had looked into finding Fin’s family. He had an aunt, uncle, and nieces in Texas, and his aunt had given him his mom’s share of what she’d inherited.

A timer went off on Finley’s phone. “I need to put Aidan’s clothes in the dryer.” He smiled. I couldn’t make sense of it, but this was Finley and I loved him, which was all that mattered. I just…couldn’t wrap my brain around wanting to serve someone like he did—doing his laundry, chores, cooking. It was all so foreign to me.

“I know. I was playing around.”